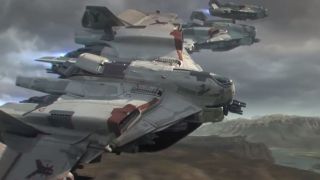 Dreadnought, Yager's forthcoming free-to-play space combat sim, is expected to release 'summer 2015', or winter if you're in the southern hemisphere. While we wait, here's a new ten minute gameplay video showing a 5v5 team deathmatch session playing out on the Glacier map. According to Yager's commentary the video shows two new ships: the assault class Light Destroyer and the support-based Light Tactical Cruiser.

As Scott Butterworth pointed out back at E3, navigating these gigantic spacecrafts doesn't look to be the most easygoing affair, and judging by the footage Dreadnought looks like it'll have a steep learning curve. Whatever the case, it certainly looks nifty in action.