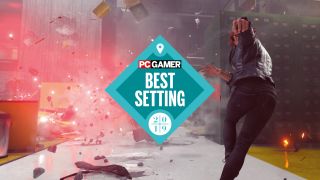 The Oldest House of Remedy's latest action adventure wins our Best Setting of 2019. We'll be updating our GOTY 2019 hub with new awards and personal picks throughout December.

Tyler: Control's brand of weirdness is familiar—Neil Gaiman, Stephen King, and George Saunders come to mind—and that’s Remedy’s thing: it never hides the influences of its metaphysical playgrounds. But it’d be unfair to call Control pastiche just because it’s smooching on Stanley Kubrick and internet creepypasta so hard. It’s Remedy’s funniest game, bursting with original, creative micro-stories about rubber duck stalkers, redacted catastrophes, and hyper-real motels. Its protagonist isn’t the most interesting person, but every single note found in its '50s office building of cosmic anomalies and interdimensional monsters is worth reading.

Rachel: An unassuming office building—not the ideal setting for an action-packed supernatural game, but Remedy Entertainment's Control has done the impossible and turned a drab administrative office into a sinister space of banal-based dread. It’s all order and paperwork within these grey concrete walls, and as you read through countless reports, official documents, and case files, it becomes more apparent that this building is a world away from ordinary—something more malevolent lies within. The building's shifting rooms and morphing realities is something akin reshaping house in Mark Z. Danielewski's House of Leaves, a place that is always stirring and can never truly settle. Slowly, the headquarter's mundane meeting rooms, glossy floors, and hollow corridors hold an immense sense of imposing bureaucratic authority. Control's setting makes you feel like a witness to a terrifying secret, hidden within redacted documents and a maze of neat and tidy offices. It's a peek behind the curtain.

Andy K: The stark, brutalist architecture of the Oldest House makes for a wonderfully evocative and sinister setting. And the way the walls shift around you, forming new spaces in real-time, is the perfect accompaniment to the game’s mind-bending storyline. Max Payne and Alan Wake’s worlds were steeped in the visual language of TV and cinema, but this feels like Remedy’s first truly original setting, taking elements of the iconic set design of legendary production designer Ken Adam (who most famously designed Dr. Strangelove’s war room set) and turning it into something excitingly unique.

Phil: I don't know how many people watched mid-2000s TV miniseries The Lost Room (if not, track it down: it was good), but I'm glad there's finally a game that does its mundane-becomes-supernatural premise justice. By marrying that core concept to the minutiae of civil service bureaucracy, Control proves a rich playground for Remedy to subvert and satirise. One of my favourite early areas is Dead Letters, a dumping ground of missives describing potentially paranormal sightings—many of which are probably anything but. It's rare that I'll hunt down every note, video and recording in what is ostensibly an action game, but Control is so packed with fun twists on sci-fi concepts that I wanted to know everything about its world.

Tom: Atmosphere and setting elevate what is functionally a fairly ordinary third person action game. It gets better once you've unlocked a few powers—especially the ones that let you telekinetically throw goons at other goons. And when you start flying around throwing cabinets at ghosts the horror turns to slapstick humour, in a good way. I love the design of your creepy living gun, too. The way it twitches and shivers as it changes forms makes it feel dangerous and unstable. I like to dash into crowds and clear them with shotgun mode. Though I dislike the boss fights, Control can be a fun action game too at points, though ultimately it's worth playing for the setting and that Remedy magic.