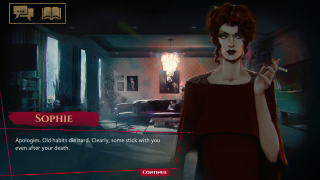 Luke Kemp played Coteries of New York, the new Vampire: The Masquerade visual novel with RPG bits. I will definitely play this at some point, especially after hearing that Luke liked the writing, but I am super picky about save systems and knowing that Coteries only has save-on-quit makes me want to wait for them to patch in some options.

Fraser Brown tried out the playable teaser of the Gothic remake, which is waiting for you on Steam if you have any of Piranha Bytes' previous games (I guess owning Risen 2 is good for something after all). I never did finish the original but Fraser is pretty stoked about the possibility of a remake and that's good enough for me.

Rachel Watts played Frog Detective 2: The Case of the Invisible Wizard, which sounds every bit as delightful as its predecessor. I enjoy the fact that this cute little adventure is being published by the Superhot Presents label. It's hard to imagine two more different games than this and Superhot.

Jonathan Bolding has been playing MechWarrior 5: Mercenaries and if you'd like to drive around in a big stompy robot that overheats if you don't periodically stomp over to stand in a river it sounds like a pretty good time. Another one for the old backlog, I guess.

I've gone back to Baldur's Gate, a game I've started three times but never finished. My plan is to do the entire series, including expansions, before Baldur's Gate 3 comes out. Even though it's been years since the last time I tried I still remember so many little details, like how you have to physically send someone down into the gnoll hole to find Dynaheir because the line-of-sight's so crap you can't see her even if you're standing right on the edge. Anyway, now I've recruited her and Minsc so it's time to kill a million kobolds. Fun!

Enough about us. What about you? Is anyone playing GTFO or Boneworks? Giving Hades a try now it's in Steam's Early Access? Let us know!