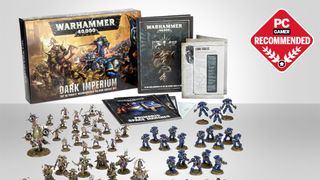 If you have an interest in learning about tabletop games but are finding it difficult to know where to start, one of the best Warhammer 40K starter sets should hold you in good stead. With faction models and a story to play out, you'll soon be well on your way. Occasionally you'll have a map to help set the scene, but if you're looking for a physical rule book, you may need to factor in the additional cost.

Once you've dipped your toes into the world of Warhammer 40K, you'll soon be creating your scenarios and pieces. You may find that you quickly reach a point where you want to expand the stories you want to tell as well as bolster the number of units that you have available. There's a lot of lore contained within the Warhammer 40K universe, and starter kits are useful for playing out your first storyline with a new army.

This guide will help steer you towards the best starter kits as well as providing a simple glossary (further down) of the people, parts, and basic rules of any Warhammer tabletop experience. The starter sets themselves often come with bonus items, so it's worth considering those before making your final choice.

Of course, if you're looking for the digital side of the Warhammer universe, you can check out our guide to the best Warhammer games on PC.

Here you get 53 models, the rule books, and a fancy box to store them all in. But you’re getting loads of extras for the asking price in Dark Imperium too, as well as plenty of Primaris Space Marines and Death Guard models. In terms of actual value, there are loads to love here. It's notable, because Games Workshop doesn’t normally do discounts or sales, so you need to pack in as much as possible for a starter set. The plastic ruler is not greatly different to the one you've probably already got, but everything else here is laudable, especially the dice and the quick-reference rules sheet.

A smaller-scaled version of Dark Imperium, Know No Fear still includes some nice items for the money. It has a handful of Death Guard and Primaris Space Marine models (31 in total, broken down into 14 Space Marines and 17 Death Guards), the box doubles as the terrain in the form of an Imperial shrine, and there’s a two-sided gaming surface with detailed artwork.

The Death Guard and Primaris Space Marine model count is slim, but there are enough to get some hands-on experience. The miniatures are snap-fit, so they don’t require glue. The two-sided game mat is helpful, and one side of it has unit placement spots to help with your deployments.

What else do you need?

The rules: The basic ruleset is 100% free. But what about that hefty tome you may have stumbled across? It’s mostly stories, pictures, and flavor text. It does contain some more advanced rules, but they’re not required to start.

Dice: D6’s are the lifeblood of any 40K game. 12 are acceptable, but you’ll want at least 24, eventually. There is an irresponsible amount of dice to drool over at Chessex and Games Workshop.

Tape measure: Everything in 40K relies on measurements. You’ll use your tape measure like a faithful sidearm, unleashing its fury for unit movement speeds, close combat charges, ranged weapons, and plenty more. Any tape measure will do.

A gaming surface: Most players buy a battle mat with printed graphics. They’re fashioned from mouse-mat material, easily roll up for storage, and they’re not too pricey. Check out Gamemat.eu, Front Line Gaming, and Gamematz for some ideas.

Wound markers: Many 40K models have multiple wounds, and you need a reliable way to track how many are left. Anything is permissible here. The most common method is using multi-sided RPG dice, or tiny six-sided dice with different colors.

Terrain and scenery: Technically optional, if you’re okay with fighting skirmishes on bland, flat, barren landscapes. Adding barricades, trees, ruins, and other items is the best way to avoid that. There are plenty of companies that sell pre-made kits, including Games Workshop, Gamemat.eu, The War Store, and Secret Weapon Miniatures.

Model tools and painting accessories: Warhammer models are simple to assemble, and they come with easy-to-follow instructions. If you’ve never painted before, check out the in-depth tutorials and tips of the day from Paint Master General Duncan Rhodes. MiniWarGaming and StrikingScorpion82 have excellent painting videos too. Alternatively, you can commission a painting company if you have the cash.

Brushes: at least three—a small layer brush, a medium layer brush, and a medium basecoat brush. Stay away from bargain brands. They’ll only betray you.

Acrylic model paints: colors depend entirely on your preferences. Vallejo and Formula P3 are stalwart alternatives to Games Workshop.

Cutters and a hobby knife: Games Workshop’s versions are top-shelf quality, with premium prices. You can buy cheaper ones if you want.

Superglue and plastic glue: any brand is groovy.

For any army you collect, you’ll need a codex to go with the models. Codices provide essential info, including datasheets and special rules for all your units, and often some interesting lore and background information too.

Overview: Hulking monks with guns. From a lore perspective, each Space Marine is seven feet tall, genetically modified, clad in power armor, and completely fearless. They have the most models out of any faction, and despite being elite foot soldiers, they somehow still have superior vehicles and tanks.

Why play them: Because you like winning. Space Marines are the darling children of Games Workshop, so they always get the most updates, the newest models, the best rules, and the biggest codices.

Overview: What if Legolas, but in space? That’s the Aeldari, also known as Eldar and Asuryani. They’re elegant and immortal, and they have the most advanced technology in the 41st millennium. The Aeldari also enjoy a gamut of nasty psychic powers, which are 40K’s version of spells. Despite their superiority in firepower and speed, the average Aeldari unit is fragile.

Why play them: With certain Aeldari units aimed at the correct targets, your opponents will drown in their own tears. It takes skill and grace to field them, but it’s immensely rewarding planning a well-laid trap.

Why not to play them: You’re always outnumbered, and there’s little room for error. You can toss around psychic powers with glee, but there’s always the chance of Perils of the Warp—an unlucky dice roll that can potentially murder your caster.

Overview: The Ork philosophy is this: killing things. That’s it. They worship two gods: Gork and Mork. Gork is brutal but kunnin’, and Mork is kunnin’, but brutal. The Orks are rumored as the most psychically gifted race, though they don’t realize it, or just don’t care. For example, since Orks believe that red vehicles go faster, they actually do.

Why play them: They’re random and hilarious. Set your units in the direction of the opposition, and then charge them directly in. Laugh maniacally when an Ork slaughters a Space Marine Terminator at one eighth the points cost.

Why not to play them: It’s common for your guns and mechanical contraptions to kill your own units. From a narrative angle, this is completely Orky. It’s funny at first, but if you’re focused on being competitive, Orks tend towards unreliable.

Overview: Every human-colonized planet has to provide soldiers to the Astra Militarum (also known as the Imperial Guard). There are so many recruits, they’re considered more expendable than ammunition. Tanks, artillery, rows of conscripts, hardened veterans, and sheer power through the weight of numbers: this is the Astra Militarum’s mantra.

Why play them: Deploy your units, insert tank shells and ordnance into your enemies’ nether regions, and use your infantry as human walls. Astra Militarum coined the phrase “leaf blower army,” in the sense that playing them is like starting up a leaf blower, pointing it at the tabletop, and blowing your opponent’s models off it.

Why not to play them: You won’t make friends playing this faction. They’re also a huge investment in your time and money, because there are so many models available, and they’re so cheap to the roster.

Overview: The Tyranids are probably the weirdest life form going in the Warhammer 40K universe—and they've got the looks to prove it. Acting as an organic and grotesque horde in almost all ways, they travel through the universe identifying prey planets that they can strip of bio- and living-matter from top to bottom, leaving behind only a stony husk of what was there before. They have strength in numbers and strangely-evolved organisms that know no fear or any other concept apart from conquering and devour.

Why play them: You've got a fascination with the biologically odd, or are a big fan of H.R. Giger's artwork. But seriously, if you want to lead an army that will literally (during the game) instil terror into your enemies and use a plethora of weird and wonderful alien technology, but can also rip the face off someone in hand-to-hand combat, the Tyranids are for you.

Why not to play them: They are hand-to-hand focused so you'll have to be canny against some enemies who do their biggest damage from range. As the word horde might indicate, there are plenty of bodies in a Tyranid army so they can be expensive to collect and to make a sizeable force with. Given their organic forms and curves, bumps and lumps they are particularly tricky to paint really well, too.

Overview: The T'au are an optimistic Xeno race who's goal is to spread their 'enlightenment' throughout the universe. A seemingly intelligence-focused race who prefers to absorb planets and societies into their ranks by diplomacy, their technology is incredibly advanced and will help to coerce those who are reluctant to just agree. Each T'au soldier is like an individual Iron Man, displaying and deploying the latest technological advancement made by the race, often enhanced by scientific breakthroughs such as gravity fields, stealth fields or AI.

Why play them: Because you're a big fan of battlemechs, technological advancements and perhaps those that value intelligence over force (see also: the direct opposite of Orcs). They're very focused on high-powered weaponry so you can create quite a powerful army with not quite as much investment in money, time and effort.

Why not to play them: They do not fare well in close combat. At all. Ever. That excellence in firepower comes at a price and that is being very vulnerable up close and personal. The T'au also have zero psychic power among their number which can cause serious disadvantages against enemies that do have it. They are also not quite as mobile as other so this can also get you in trouble.

The best of the rest

The factions highlighted above are just a paltry few, and you should feel free to explore the others. Check out Games Workshop’s YouTube channel for all the latest releases and info. If you don’t have any friends who play, take a visit to your local gaming store (Games Workshop branded or otherwise) to get some matches going.