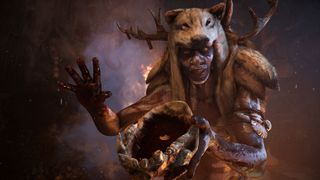 The Far Cry Primal system requirements were revealed yesterday, providing a timely boon for all of you who want to know if your rig can play it. For those more interested in determining if you actually want to play it, the two-hour community stream Ubisoft posted to YouTube today might be more informative.

The video features a lot of chit-chat with Illustrator Naomi Savoie, Creative Director Jean-Christophe Guyot, and Lead Writer Kevin Shortt, so you'll need to do some clicking around if you're only here to eyeball the gameplay. There's plenty of that on offer though, and it looks absolutely gorgeous—this obviously isn't being played on a baseline system—but there's some interesting stuff in the developer commentary, too.

Shortt, for instance, explains that the studio decided to forgo subtitles in open-world (i.e., non-mission) sections of the game because they made the screen “too busy", but players can still get a handle on what's happening around them as they pick up the basics of the various in-game languages, which are built upon a system of “real logic." (Remember that Ubisoft actually had linguists work on the game to help develop and then regress the tribal languages, to give them a greater feeling of authenticity.)