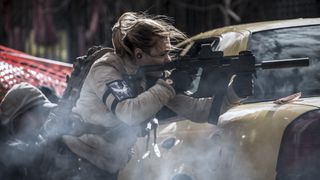 At a recent Ubisoft event in Los Angeles, I got to watch a live-action story feature for Tom Clancy's The Division called "Agent Origins." Now you can watch it too, provided you're a member of Amazon Prime. If not, there's a trailer for the feature above. Despite its name, the feature (which runs about a half-hour) doesn't really show the agents' origins, but it does provide a little background on the circumstances of post-virus Manhattan and shows each of the four agents being called up for shooty-duty.

The inspiration for The Division, we're told, comes from a June 2001 simulation of a smallpox attack conducted by the U.S. military called Operation Dark Winter. The exercise was meant to determine the challenges the country would face during a coordinated biological attack, and the findings concluded that we completely suck and are not even remotely ready for such an event.

The solution, according to the feature, was to embed highly-trained secret agents among the populace of Manhattan and activate them only when society had broken down to the point of armed prisoners roaming the streets and gangs of flame-throwing psychos roasting both the dead and the living. I maybe wouldn't have waited quite that long to activate The Division's agents, but then I also probably wouldn't have equipped each secret agent with a giant, incredibly conspicuous glowing smartwatch, either.

From what I recall of the feature, one agent is a grim family man, another is a fireman, one is a sensitive type who helps out surviving citizens, and one is a woman who for reasons unknown has been forced to embed with a couple of pizza-obsessed dweebs. We also get some details on how a bunch of inmates from Riker's Island Prison escaped (by shooting everyone) and what they're doing in the city now (they're shooting everyone). The production values are pretty high, the acting talent is somewhat less-so. The feature (apparently the first of four) can be seen on Amazon Prime. Here's a link that should start it playing in your browser if you're a subscriber and you're logged in.