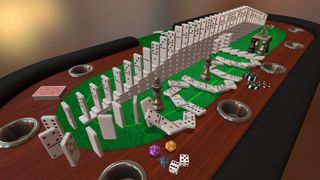 Tabletop Simulator is just what it sounds like: A simulated table, atop which you can play virtual versions of real-world games. It comes with 15 classics, like chess, poker, and dominoes, as well as an RPG kit with animated figurines, and players can create and share their own games via the Steam Workshop. There's even an option, as demonstrated by extremely popular YouTuber Tyler Wilde, to flip the table.

Tabletop Simulator hit Steam Early Access in April of 2014—we took a look at it not long after it went live—and yesterday the developers at Berserk Games announced that it will go into full release on June 5. But that won't mean the end of development, as the studio still plans to implement VR support, a Space Theme Pack, a mobile version, and other features and fixes that will inevitably prove necessary.

The studio also announced a deal to develop Superfight, a card game about battles between fictional superheroes created by Robert Kirkman's Skybound Entertainment, into official Tabletop Simulator DLC. "The entire Skybound team is thrilled to expand the universe of Superfight with Tabletop Simulator," Skybound Interactive President Dan Murray said. "We look forward to seeing Superfight live in the digital world for years to come."