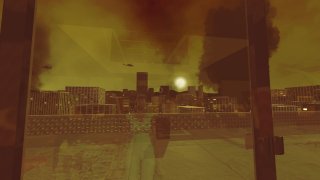 Tale of Tales is the studio that made a "social screensaver" about roaming through a magical forest as a deer with a creepily human face; a graveyard-visiting simulator, in which you could sit and contemplate the nature of life and death, and possibly die in the process; a game about sex that I couldn't get past second base with; and now, Sunset, which by comparison looks fairly conventional, yet still entirely unique.

The game takes place over the course of a year in the early 1970s, in the fictional South American city of San Bavón. Civil war has engulfed the nation, but you'll experience the world around you not as a fighter, but as a housekeeper, tasked with tidying the swanky apartment of Gabriel Ortega on a weekly basis. Which isn't to say that cleaning is all you can do; it's possible that you could be swept up in the revolution, too—or you can just keep your head down and go about your business.

I've been a fan of Tale of Tales' work going back to The Endless Forest, and I'm really looking forward to getting my hands on Sunset, which looks to be its most ambitious work yet. It comes out on May 21.