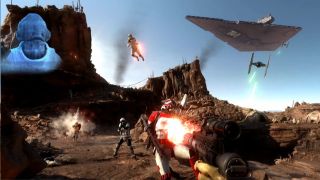 Star Wars: Battlefront is likely to get substantial airtime at Gamescom this week, and in the time honoured tradition of pre-convention hype mongering, EA has released a snippet of what we can expect. The focus will be squarely on Fighter Squadron gameplay, which is aerial combat for those unfamiliar with the series. It's going to be lovely, but here's a tease recently Tweeted by EA:

As the end of that video reveals, the full gameplay demonstration will hit August 5. In the meantime, why not gawp at these 4K screenshots, or watch the only official PC gameplay video to release so far.

In other exciting DICE related news, Mirrors Edge: Catalyst will also be at Gamescom. It has a tantalisingly brief new trailer as well, showing what appears to be in-game footage.