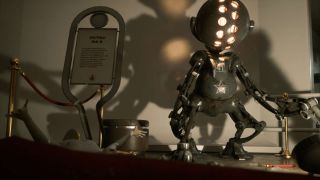 Russian gaming service 4game claims it has played four hours of an in-development build of the upcoming immersive sim Atomic Heart, spanning five in-game areas, and has released a lengthy video detailing just about everything it saw.

Set in an abandoned Soviet research facility still crawling with its abandoned experiments, the Russian immersive sim initially picked up interest thanks to the unique art style, eery setting and cutting-edge graphics of its debut trailer.

While the video doesn't show much of journalist Alexey Makarenkov's own gameplay, it does show some off-screen footage of development builds, which is important considering the game's controversial history.

Excitement for the game has been balanced with accusations of managerial incompetence, faked gameplay footage and mass layoffs at developer Mundfish, leading many to believe it'd simply never come out. Mundfish has refuted these claims in numerous statements and interviews, arguing they were made either by an anonymous source for their own personal gain, or by a disgruntled former employee.

Considering one of the main accusations surrounding Atomic Hearts was that the gameplay trailers that built so much excitement may have been faked and prerendered, the brief glimpses of development builds we see in Makarenkov's video is promising evidence that the game isn't too far off what we've already seen.

The video is a hefty 45 minutes long, in Russian, with poorly-translated English subtitles, and most of it explains in painful detail things we really didn't need to know. Did we really need to know that stamina dictates how often you can attack, or that if you stay in water too long, you'll drown? Probably not. There are a few small tidbits that make the video worth paying attention to, though.

The most interesting bit is how the enemies in each area form their own ecosystems—the example given being how the bee-like security cameras 'live' in a hive together, and will emerge from that to hunt you down should you be detected by another enemy. If they can't find you, they'll instead go through the level and repair enemies you've already destroyed. However, hacking or turning off a hive will limit how many of these bee-drones are active, making exploring the level and picking your targets more important.

The video also talks about a later, puzzle-heavy level that can be rotated and shifted through clever switching of levers and the use of 'Polymer'—gel-like substance that can be swam through to get to different areas. Makarenkov points out that what he played was in early development and so rife with bugs, but his description of it still sounded cool (if slightly Dishonored 2's Clockwork Mansion-y).

Ecosystems and polymers aside, this video is important because it shows that Atomic Heart is still happening. It's refreshing to see a developer so wrapped up in controversy like Mundfish open itself up to such intense scrutiny and criticism (Makarenkov doesn't hold back on some of his criticisms of how buggy his preview was).

Atomic Heart doesn't have a release date yet, and it's due to release for both standard gaming platforms and VR, for those who want to get right up close and personal with the horrific soviet experiments.