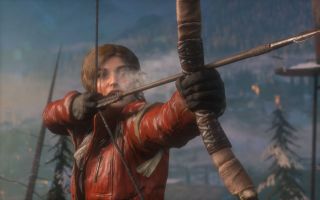 Rise of the Tomb Raider will be here soon, and based on our review it's pretty good stuff: not revolutionary in any way, but “an incredibly competent action-platformer.” And as this new “PC Tech Feature” video demonstrates, it's also been improved in a number of ways from the Xbox One edition that came out last year.

“Lara's epic journey becomes even more immersive on the PC version of Rise of the Tomb Raider, as Crystal Dynamics and Nixxes introduce several new technical features to the game, and push the boundaries of next-gen visuals,” the smooth-voiced narrator intones in the video. Those features include HBAO+, 16x anisotropic filtering, hardware tesselation, high-velocity muffler bearings, dynamic foliage, and a significantly improved level of detail.

One of those terms I just threw out may not actually be a real thing, but the point is that if you have the hardware, Rise of the Tomb Raider will deliver a dramatically improved visual experience when compared to the Xbox edition. And as we noted in our review, there's a large number of other graphical options on the table as well, including depth of field, bloom, screen space reflections, motion blur, and, most importantly, PureHair.

Rise of the Tomb Raider hits the PC tomorrow.