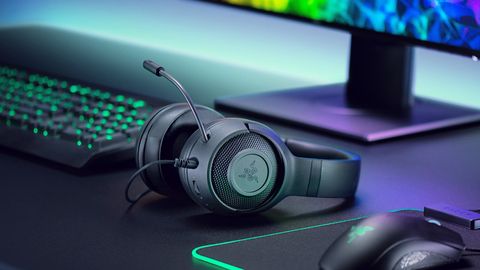 The X is a worthy addition to the Kraken range, and it impresses with that virtual 7.1 surround sound and low price. However, it drops the ball with a non-detachable mic.

If you’re looking for a more immersive experience while gaming, you’ve got two choices: you can either take the plunge with the best computer speakers or try out one of the best gaming headsets instead. If the latter’s more your speed, and budget is a concern, the Kraken X is absolutely worth considering.

A cheaper alternative to the tricked-out Kraken, the X boasts a more streamlined design than you might be used to from Razer cans. However, make no mistake—the quality is still there. Despite being mostly plastic, this is a very comfortable headset that you’ll be happy sitting with for hours. Both the leatherette head cushion and earcups are cosy without being overly hot. They’re also comfy for those wearing glasses thanks to hidden cut-outs that accommodate the arms.

It’s a similar story with the Kraken X’s features. There aren’t tons of them on offer, but what’s present is good nonetheless. Coming in at a dainty 250g, it’s not exactly going to be weighing you down. This is accompanied by the usual on-board audio and mic control, a non-detachable (yet flexible) cardioid microphone, and 7.1 virtual surround sound via a downloadable app. Although most of the above is business as usual, the latter is where things get interesting.

Although the Kraken X’s surround sound is fine (and it suffers from positional audio being dumped into one ear or the other depending on where your character’s facing), using the 7.1 add-on elevates it tremendously. It provides greater depth, clarity, and definition that makes going back to standard sound difficult. It also pushes the X’s score up a few notches. For cans that only set you back $50, that’s tremendous value.

The problem is, you can’t remove the microphone. That’s not a huge issue, but it does reduce the headset’s utility. You can’t take it out and about for music without looking a bit weird, for example. Equally, the lack of wireless capabilities is always something of a nuisance, especially if you don't have an extra long cable. Personally speaking, I found that the wire got in my way and wasn't long enough.

Still, the Kraken X’s performance and affordability help smooth over these bumps. Is it the best headset we’ve ever used? No, but it’s pretty great nonetheless, and it's exceptional value for money. If you want to go Razer, the Kraken TE is the premium choice, but for those in search of a decent, affordable headset, you’ll struggle to find something better than this at that price.

The X is a worthy addition to the Kraken range, and it impresses with that virtual 7.1 surround sound and low price. However, it drops the ball with a non-detachable mic.