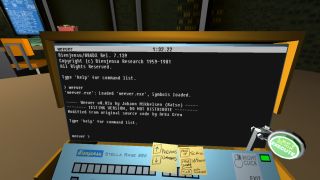 Puzzle-meets-heists-meets hacking game Quadrilateral Cowboy released last week and Tom seemed to enjoy his time with it. Creator Blendo Games’ “signature sense of style” won him over, however he did feel slightly let down by the fact the studio’s latest venture failed to reach its full potential. Could more missions free-of-charge help this matter? In any event, Blendo's head honcho Brendon Chung has revealed more are en route in the coming weeks.

During a Reddit AMA, Chung spoke directly to Quadrilateral Cowboy’s scope and explained that he generally tailors his projects around his own skillset. “For the most part,” he says. “I think Quadrilateral Cowboy does a pretty good job at not over-extending its reach.”

He was then asked if he had any plans to create more missions at some point down the line, to which he responded: “I have some ‘deleted scenes’ I intend to package up as a mod download. I fully intend to [make games with a similar art style], I grew up playing a ton of first-person games and have a soft spot in my heart for them. I also plan to continue keeping all of my games in the same shared universe, so look forward to more of that.”

Speaking to RPS, Chung later confirmed that the extra levels will be free and made available via the game’s Steam Workshop. While he doesn’t have a set date in mind right now, he suggested that he is “loosely aiming for sometime in the next couple weeks.”