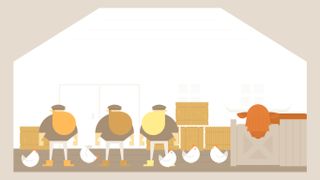 You had me at "large, bearded fishermen", Burly Men at Sea, then you reeled me in with your talk of a branching narrative, and your lovely art. This Scandinavian folk story concerns three adventure-seeking fishermen, and it maybe looks like something Simogo or Inkle might make? Here's the premise:

"Set in early 20th-century Scandinavia, the game's story branches through discovery in a series of encounters with creatures from folklore. You play as storyteller and wayfinder, shaping the narrative around the characters through interaction with their environment."

And here's the latest trailer, which reveals the game's release date, September 29:

You can look at Burly Men on Steam, Humble and itch.io, though you won't be able to stroke their luscious beards for four-and-a-bit-weeks.