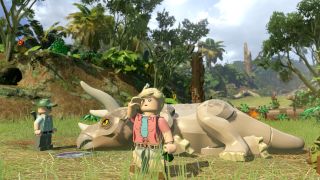 Hey, you know what? Lego Jurassic World might be alright. I say this because the other Lego games, mostly, were pretty alright, despite some terrible platforming bits and a few times when they weren't based on Lord of the Rings. Lego Jurassic World, coming June 12th, retains the open world co-op and simplistic action of previous entries, but adds playable dinosaurs, those weird hamsterball things you see in all the film trailers, and the opportunity to make your own dinos. It's based on all four films, including the new one, which doesn't look so hot. (But isn't Chris Pratt doing well for himself?)

We can see some of these things in action in the above trailer—which, importantly, features a velociraptor on a motorbike—and which also teases the possibility of underwater swimming sections (playing as a formerly prehistoric creature, natch). I like the idea of exploring the entirety of Isla Nublar—but only if I can do it as Ian Malcolm.