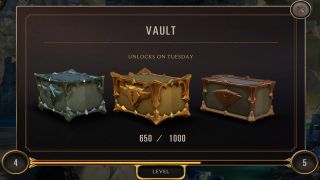 How can you maximise the rewards from your Legends of Runeterra weekly vault? Unlocking cards is fundamental for crafting competitive decks, and the weekly vault is an excellent opportunity to earn valuable freebies. Play games and earn XP to discover more allies to add to your arsenal.

I'm here to help you learn about the Legends of Runeterra vault, what it is, and how it works. It's not only a nice way to supplement your library of cards from across the game's six diverse regions, the vault also drops wildcards, which are available in four rarities and can be exchanged for specific cards of the same value. But enough rewards: let's take a look at how to earn them.

What is the Legends of Runeterra weekly vault?

The Legends of Runeterra vault is a reward that unlocks once per week. You can stack vault rewards by playing the game and earning XP. The vault consists of 13 levels and includes three loot-filled chests, but each level gradually increases the value of the contents.

Vault rewards unlock every Tuesday and can be claimed until the next reset. After the rewards have been claimed, the vault resets to level 1, which contains three bronze chests. Max out your rewards by earning a whopping 25,000 XP in a week, which gets you three diamond chests. Expedition Tokens are included in level 10 rewards and can be redeemed for free entry to an Expedition. From the home screen select the Play tab and Expeditions to access this mode.

How to earn Legends of Runeterra vault rewards

The simplest way to earn rewards is by playing the game, but the XP you earn from it diminishes over time. You'll also earn more XP dueling real players than battling the AI. 400 bonus XP is awarded for your first PvP win, 200 XP for the second and 100 for your third victory. Following that, you receive 200 XP for your next 10 wins. XP is then reduced in increments as you accumulate more wins.

The same is true for wins against AI opponents, although the rewards are lower. Your first 5-10 AI wins will give you 75 XP and whittle down to 0 XP after 21 wins. Don't feel discouraged if you lose, as losses still garner XP. PvP losses award 100 XP and AI losses 50 XP. These also depreciate, the more games you play.

Before racing into a PvP match, complete all the tutorials. Not only will these familiarise you with LoR's keywords and mechanics, these also reward you with XP the first time you finish them.

PvP win bonuses refresh daily and are displayed at the bottom of the Daily Quests tab. These are easy to complete, provided that you have a deck that can score you some victories. Then there's also a new daily quest queued each day, but it can be rerolled if you don't fancy it.