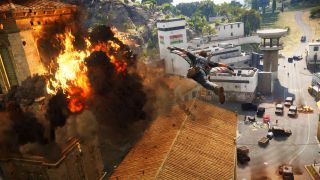 One other bit of trivia came from art director Zach Schlappi, who cited Michael Bay as an artistic influence for his use of color, sunshine, gleaming metal, and fireballs. It’s not something I ever noticed before, but if I had to sum up Just Cause in just a few words, I would go with “Michael Bay: The Game.”

Looking for more PAX East news? Check out the tag PAX East 2015 for all of our coverage from the show.