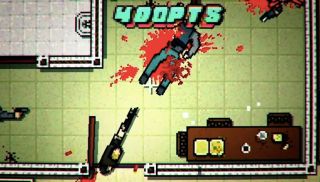 Ahhhh, the music! For all Hotline Miami's poking and prodding of its players' moral core, it was the first game's faux-80s Drive-a-like soundtrack that propelled me through wanton violence and gore. On the basis of this new trailer for Hotline Miami 2: Wrong Number, the same is set to happen again.

Cara had some serious reservations when she played a demo of the game last year, and it'll be interesting to see how (and if) the full experience contextualises its narrative extremes. It will also—if the previous game is anything to go by—be an absolute joy to gun down murderous maniacs to some "thumping" "beats".

Hotline Miami is due out in "Q3", which is industry speak for "around September".