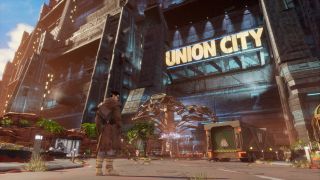 Beyond a Steel Sky is the long-awaited sequel to cult '90s point-and-click adventure Beneath a Steel Sky, which I revisited a couple of years ago. You can play the original here for free. The game, which is being developed by Broken Sword creator Revolution, was originally slated for a late 2019 launch. But game development being the unruly, unpredictable beast it is, it's now scheduled for release "a few months later" sometime in 2020.

Beyond a Steel Sky sees hero Robert Foster returning to Union City, the dystopian metropolis he escaped from in the first game. Watchmen artist Dave Gibbons returns as art director and the game features an intriguing hacking-based puzzle system that lets you change the behaviour of electronic objects by dragging and dropping nuggets of code. I previewed the game recently and I loved what I saw, especially the hacking stuff.

Many moons ago, Revolution pioneered a system called Virtual Theatre. This brought some basic simulation elements to its adventure games, meaning some characters would have routines, or only appear in certain places at certain times. In Beyond a Steel Sky, Revolution is hoping to expand on this concept dramatically, which is part of the reason why the game has been delayed.

"The extra time is being used to ensure that we realise our vision," the developer says. "Integrating conceptual innovations like Virtual Theatre and system hacking into adventure gameplay; innovating with graphics technology in ToonToy; and working closely with Dave Gibbons to create a beautiful visual style."

ToonToy is a technology Revolution is developing to give Beyond a Steel Sky a stylish comic book aesthetic, directly inspired by Gibbons' art. This might be Revolution's prettiest 3D game yet, and the sense of scale as Foster approaches the towering front gate of Union City is pretty impressive. I'm also glad to see that the sequel has retained the original's goofy sense of humour.

You can read more about Beyond a Steel Sky, and keep up to date with its ongoing development, on Revolution's news feed.