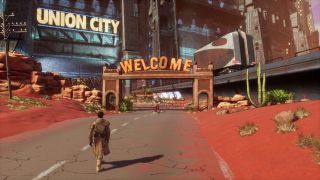 Before we dive in, some history. Back in 1994, Revolution Software, the UK studio behind the Broken Sword series, released a point-and-click adventure called Beneath a Steel Sky. Set in a future Australia, it followed the adventures of Robert Foster, an outback wanderer who found himself stranded in the dystopian Union City. The game was notable for the involvement of Dave Gibbons, the artist behind Alan Moore’s Watchmen comics, and it was a commercial and critical success.

Beneath a Steel Sky could have easily been forgotten, one of those adventure game curios that we occasionally dig out of the archives to fondly remember. But for years it’s been one of the games people receive for free when they sign up for GOG.com, which has kept its heart beating. Not to mention a recent mobile port, which lets you play the thing on a modern smartphone.

Between this and the Broken Sword series’ appearance on phones, Revolution has always been great at keeping its beloved old games alive.

Fast forward 25 years and Beneath a Steel Sky has developed something of a cult following. It’s a deeply strange game, being a curious mix of bleak urban dystopia and Python-esque British humour. Despite the Australian setting, the people you meet are mostly English northerners—and the hero, Foster, has an American accent for some reason. But despite this dizzying tonal inconsistency, it’s a very good adventure game. I especially liked the ability to implant your AI pal Joey’s brain into various different robot bodies.

Union City flips familiar dystopian city tropes, with the wealthy and privileged living in the lower levels and the poor being confined to the upper levels, where an endless sea of factories belches black smoke into the sky.

Rigid and unfair class systems were a big theme in Beneath a Steel Sky, and you can expect a continuation of that. In the first game Foster begins at the very top of Union City after a helicopter crash.

In the sequel, titled Beyond a Steel Sky, he starts his adventure at the front gate and has to find a way in.

Beyond a Steel Sky is fully 3D, with a third-person viewpoint, and Revolution has developed a graphics technology designed to mimic the distinctive style of Gibbons, who is back on board again as art director. The only location revealed so far is the entrance to the city, but it’s an impressive sight—a colossal gate with skyscrapers stretching endlessly into the stark, blue desert sky.

The light-hearted tone of the original game has been retained, too. This isn’t some bleak, rain-sodden Blade Runner vision of the future. It’s bright and colourful, with expressive characters rendered in a bold comic book style.

A benevolent AI, strongly hinted to be Joey from the first game, is running the city now, but this being an adventure game, finding your way in involves more than just dropping your old pal a WhatsApp. Revolution is still an adventure-game designer at heart, and Beyond a Steel Sky will be heavy on puzzles, conversations, and exploration.

Dialogue is presented similar to Mass Effect, with a selection of options to choose from—a pretty standard affair with lines marked as to whether they’ll progress the story or just provide background info and gags. But Beyond has a few fresh ideas up its sleeve too, including a new version of its Virtual Theatre system.

Sorry, more history. Revolution’s first few games, including Lure of the Temptress and Beneath a Steel Sky, used a technology called Virtual Theatre that introduced some basic simulation elements to the traditional adventure game format. This meant that some characters would have routines, and would only appear in certain places at certain times. It was pretty basic stuff, but it made the world feel more alive.

In most adventure games characters just stand in one place waiting for you to talk to them, here they moved around, and Revolution is taking this concept a step further in Beyond.

Spanner in the works

The entrance to Union City is a large circular area teeming with life, including floating robots, citizens wandering around, and even some native Australian wildlife. Ahead is the city gate, behind us, the endless expanse of the Aussie outback. And this location is like a big clockwork mechanism running on a routine. Almost like a Hitman level. And to puzzle his way into the city, Foster has to break this routine.

I won’t spoil any specifics, but the idea is that the world is a machine and you’re the spanner being hurled into its gears, which involves some old-fashioned point-and-click object puzzling, and something altogether more interesting and innovative—LINC hacking.

If you didn’t play the original Beneath a Steel Sky, LINC (that stands for Logical Inter-Neural Connection) is an all-powerful AI that connects and controls everything in Union City. Because as we know, entrusting the running of something like a city to an advanced, possibly sentient machine is always a good idea. And by far my favourite feature in Beyond is being able to use a handheld hacking device to dip into the code of various objects in the world and reprogram it using a neat drag-and-drop interface.

An example of this is when Foster doesn’t have the correct credentials to access a computer system. Rather than hunt for the correct access chip, he hacks into the system and flips two visualised pieces of code around. So now when it detects the wrong credentials, instead of denying access, it grants it.

Other LINC hacking puzzles are more complex, including speeding up a conveyor belt to fling a crate at a robot, immobilise it, and steal its battery. It’s a similar kind of programming system to games like Hack ‘n’ Slash or Heart. Break(), but with no coding required, just dragging blocks around.

This combined with the Virtual Theatre system makes for a wonderfully reactive game. Revolution also says that LINC hacking won’t just be used for solving puzzles, but causing mischief too.

You’ll be able to use it to mess with characters and otherwise screw up the simulation, which should result in some amusing moments. Again, like the original, Beyond has that slightly strange mix of grim dystopian fiction and goofball humour, which is, honestly, exactly what I wanted to see from a Steel Sky sequel. I just hope there are as many northern accents in this one, because very few dystopias feature as many Brummies and Geordies as Beneath a Steel Sky did.

A sense of humour has always been at the heart of Revolution’s games, and I’m glad to see it back in full force in Beyond, which could have easily leaned into the grimdark stuff that’s so popular in cyberpunk-style games at the moment. The characters are also not what you would expect from a setting like this.

Among the people Foster meets are a hippy repairman, a beer-sucking trucker camped out on a deck chair, and a little kid from the outback who has information about the missing child Foster is entering Union City to find. They’ll all play a part in fleshing out the story, which continues directly on from Beneath a Steel Sky—though the developer is staying tight-lipped for now as to exactly how.

I’m delighted to see Revolution making a new adventure game and venturing once again, after those few 3D Broken Swords, into the world of three dimensions. Beyond a Steel Sky is exciting because it’s not just a standard point-and-click game, with that LINC hacking system and the Virtual Theatre simulation standing out as something new for the genre. Revolution is also keen to stress that you don’t need to have played Beneath a Steel Sky to enjoy Beyond.

It’s a new story that can stand alone, which seems a wise decision, because as good as the 1994 game was, that was a long time ago. Beyond a Steel Sky seems the perfect mix of old ideas and new innovations—I can’t wait to see more.