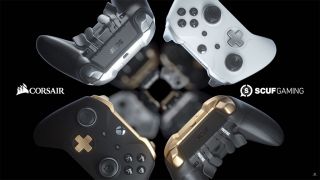 Corsair is about to add yet another product to its growing portfolio: game controllers. Rather than design its own models, however, Corsair is planning to buy Scuf Gaming, the company announced on Monday. The acquisition is expected to be completed within a month.

"We are thrilled to greatly expand our portfolio of industry-leading peripherals and enter the gaming controller space to help gamers play at their best," said Andy Paul, founder and CEO of Corsair. "Scuf leads the market for performance controllers and are a key ingredient to the success of countless esports professionals."

Scuf is a familiar brand to many gamers, both on console and PC. The company has been serving up custom game controllers since 2011, with high-end designs that predate first-party options; Microsoft's Xbox Elite Wireless Controller debuted in 2015, and the Series 2 (hands-down the best PC controller in our opinion) came out last month.

"Over the last ten years, we’ve worked tirelessly to create the features that have made Scuf the preferred controller for the majority of top professional gamers. Controllers are the single most important connection between an individual and their game, becoming an extension of the player to maximize their performance," said Duncan Ironmonger, founder and CEO of Scuf Gaming.

Following the acquisition, Scuf will remain a separate brand and continue to operate out of its headquarters in Atlanta (as well as regional offices). This is the same approach Corsair has taken with Elgato, a maker of streaming and broadcasting products, which it bought last year.

The same goes with Origin PC, a popular boutique system builder that Corsair bought a few months ago. These acquisitions and the way they are being handled speak to a larger strategy.

George Makris, Corsair's marketing director, told PCWorld that while Corsair could build some of these products on its own, it might take several years, versus just buying a smaller company (like Elgato and now Scuf Gaming) outright.

In addition to an existing controller lineup, Scuf owns 103 patents, and has another 55 pending, all related to controller design. Those will all belong to Corsair once the buyout is complete.