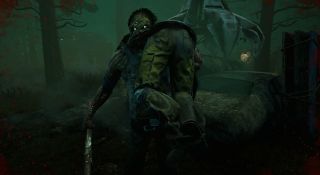 Screaming, panicking slasher flick victims are always making bad decisions, but who can be trusted to make good decisions while being chased through the woods by a murderer? I tried to avoid being put on a meat hook at PAX East yesterday, and practically ran backwards into a meat hook.

Dead by Daylight, which has been playable on the PAX show floor all weekend, pits four survivors against a murderer in procedurally-generated levels. The survivors play in third-person, running and creeping around the woods in search of generators (it's always generators) to repair. Fix up enough and an escape route opens. The killer, meanwhile, plays in first-person and earns points by injuring survivors and hanging them on meat hooks. The round ends when all survivors escape, are hung up or dead, or some mix of both.

Playing as a survivor is pretty rough. The killer is usually easy to spot when he's close, but even if I saw him before he saw me I panicked. My instinct was to run, but that gives me away with a red streak on the killer's screen, so taking it slow is usually better. If I did have to run, though, I had to zigzag and vault over obstacles and double-back a couple times to get away.

What's most interesting to me is the victims' relationship to each other. Ostensibly you're all on the same team, working together to win, but it doesn't quite play out that way. If someone's been put on a hook, finding and saving them helps the team, but you also risk walking into a trap. And if you see the killer, how often are you going to encourage him to chase you and not the player next to you?

Yesterday, I spoke to producer Mathieu Côté about all of the above and more, which you can watch at the top of this article. I'm not sure if I like it yet, but I didn't get well acquainted with Dead by Daylight's nuances through one session with all new players. We should be playing more pretty soon, though, as it's scheduled to release on Steam on June 14.