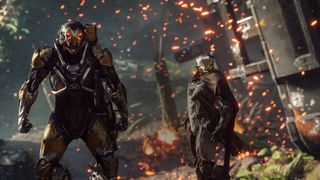 After delaying Anthem's first big in-game event back in May, Bioware is finally kicking off Cataclysm festivities with a series of pre-event challenges. The Freeplay challenges are called "The Oncoming Storm" and revolve around crystals.

Bioware hasn't yet specified, but it's assumed these challenges are part of the two week "pre-Cataclysm" period before the event starts in full force. Once the storm really comes, there will be a new area, new legendary weapons, and more.

New Anthem stuff in general is exciting, but the challenges themselves don't look particularly thrilling. You're either collecting crystals in the open world, completing crystal-themed world events, or killing crystallized enemies. This imgur thread put together by the Anthem subreddit shows the details of each challenge.

The fans sticking around hope Bioware will deliver with the full Cataclysm event, but many have already given up on Anthem.

Last month, Steven talked about how Anthem feels hopeless in its current state. "In four months BioWare has only managed to address some of Anthem's most broken designs, but we're still left with a shooter that is woefully boring and sparse," he said.  "If BioWare really wants to save Anthem, it needs to give up on its half-assed post-launch roadmap, start over from scratch, and build something actually worth saving."