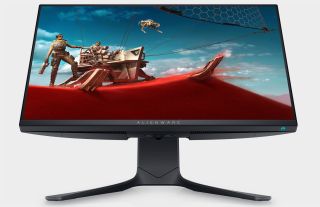 Just days before CES kicks off, Alienware announced a revamped version of its 25-inch AW2518HF gaming monitor. The size and specs of the upcoming AW2521HF are largely the same, except it swaps out the TN (twisted nematic) screen on the old model for a higher quality IPS (in-plane switching) panel without sacrificing any speed.

That's to say it retains the same 240Hz refresh rate as its predecessor, making it suitable for competitive gaming. We have already seen some larger size IPS displays ramp to 240Hz, including Alienware's own AW2720HF. However, I'm not aware of any 24-inch or 25-inch monitors sporting IPS panels with a 240Hz refresh rate.

IPS panels typically offer better image quality than TN screens, by way of displaying a wider color gamut. In this case, Dell says the AW2521HF offers 99 percent coverage of the sRGB color space. Viewing angles are better as well, with IPS panels commonly maintaining a good image at up to 178 degrees (horizontal and vertical). Each monitor is different, though, so we'll have to wait until we get our hands the AW2521HF before we pass judgement one way or the other.

Alienware is also claiming the AW2521HF offers a "true" 1ms response time, presumably meaning it is a gray-to-gray (GtG) measurement, which is how long it takes for a pixel to change from one shade of gray to another.  While not specified, I'm guessing the 1ms metric is an overdrive rating. Enabling overdrive can sometimes introduce ghosting (DisplayNinja has an excellent article on the subject), though there is no way of knowing how much of an issue (if at all) this is without testing the monitor.

As you might have surmised, this is an FHD monitor with a native 1920x1080 resolution, just like the larger 27-inch model. 1080p is arguably a better fit for a 25-inch display anyway.

The AW2521HF also features "FreeSync and G-Sync compatibility." Translation—it's a FreeSync monitor that works with works with G-Sync, though it's not clear if it will bear the G-Sync Compatible badge, which requires certification by Nvidia, or if Alienware is simply saying it handles G-Sync just fine based on its own tests.

Alienware says the AW2521HF will be available globally on March 11 for $499.99. We'll have to see how street pricing shakes out. The specs alone put this one in possible contention as one of the best gaming monitors, though the larger 27-inch AW2720HF is $409.99 on Amazon right now.