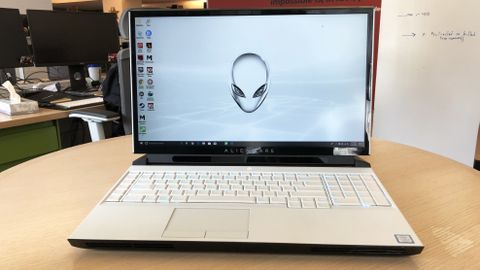 Marketed for its "unprecedented upgradeability," the Alienware Area-51m is more of a promise than a final product. While supremely high performance, it lacks the one killer app needed to thrive among the more powerful desktops and more affordable laptops it aims to usurp.

Despite making some of the best gaming laptops of the last few years, Alienware still has a bad rap. To reconcile with its former audience, the Dell subsidiary has devised the Area-51m, a thick, albeit powerful and supremely upgradeable "musclebook" computer. From the CPU to its graphics counterpart, you can service the Alienware Area-51m almost to the extent of a desktop PC. Well, sort of. While it uses a normal S-series Coffee Lake R processor, Dell doesn't offer the replacement GPUs just yet, and it's not clear when it ever will.

That makes the Alienware Area-51m tough to recommend in its current state, especially given its overly ambitious pricing. Though it's currently on sale for $3,959.99 directly from the Dell site, the model I was sent for review costs a debt-inducing $4,499.99. Ouch. Granted, it does house a desktop-class Intel Core i9-9900K, an Nvidia GeForce RTX 2080, 32GB of RAM, 1TB of SSD storage and another terabyte of spinning hard drive space. Plus, an 8GB solid state hybrid drive for, you know, reasons.

As I noted in my CES preview earlier this year, truly upgradeable gaming laptops aren't a new concept, and this one in particular treads familiar territory. Also remembered for its swappable GPU tech, the original Alienware Area-51m was introduced almost two decades ago. The new model is less bulky, measuring 1.7 inches at its thickest point in closed clamshell. On the front end, it's even slimmer, at 1.09 inches thin. For a performance focused beast, that's not too shabby.

In comparison, the similarly upgradeable Origin EON17-X bears a 1.6-inch profile. Both wield 17.3-inch G-Sync displays. However, the EON17-X comes in 4K while Area-51m buyers are limited to 1080p, or FHD. Considering it touts the mobile equivalent of an $800 graphics card, I'd expect at least a 1440p, or QHD, display from the latter.

Then again, that might necessitate a third power brick. Yep, if you want to avoid draining the Alienware Area-51m's 90 watt-hour battery during ordinary use, you'll have to plug two separate charging adapters into its protruding rear. Their wattage varies depending on your exact configuration. Whereas some of the lower end configurations ship with a pair of 180-watt blocks, mine was more excessive.

Stashed inside the box was one 180-watt charger, accompanied by a larger 330-watt part. Should you favor portability over performance, might I suggest the Alienware m15? The Area-51m is anything but a convenient travel companion.

It is, in the most literal sense, a desktop replacement. Rather than lugging it around, the Alienware Area-51m remains seated, permanently, atop my desk. Weighing eight and a half pounds without the chargers, it's intended for the stationary gamer who prefers an all-in-one alternative to the best gaming PC. No need to buy a mouse, monitor or keyboard—the Area-51m is an all-expenses-paid machine. And, for onlookers, it's near-perfect eye candy.

Unlike the performance-restrained Alienware m15 I reviewed at the tail end of last year, the Alienware Area-51m makes use of Dell's new "Legend" design language, bringing a polished, modern aesthetic to an age-old brand. In other words, the Area-51m takes Alienware's sci-fi influences to new extremes. Its lid and keyboard deck, for instance, boast a clean, soft touch finish, in both its Lunar Light (white) and Dark Side of the Moon (black) flavors.

Presumably in an effort to minimize costs and maximize profits, only some aspects of the Alienware Area-51 chassis are made from magnesium alloy, and in the laptop space we call that stingy. These days, any gaming laptop over $2,000 ought to come in anodized aluminum, a la the Razer Blade 15 Advanced Model. At the entry level, the Alienware Area-51m costs $1,949.99 for an i7-9700 and an RTX 2060. Across the spectrum, I had hopes for a vastly superior build quality.

Wrapping around the screen, the narrow black bezels on the Alienware Area-51m stand out in photos, and they're a marked improvement from those on the Alienware m15. By that I mean there's no massive disparity between the size of the side bezels and their top and bottom adjacents. Here, the thin bezel future is proven a tangible reality for Alienware.

As for the screen itself, how's that Shania Twain song go? Oh, right, it don't impress me much. 1080p at 144Hz might be fine for ardent competitive multiplayer gamers, but for those of us who favor resolution over frame rate, I wish there was at least a QHD panel option. Ideally, with a blistering RTX 2080 inside, I'd want 4K. I know I've said it before, but seriously, if I'm going to buy a gaming rig the price of a used car, I want the best in everything. In 2019, $4,500 warrants far more than 1080p.

Where the Alienware Area-51m does excel is with its keyboard. 2.2mm of key travel feels like a dream on a laptop. Whether I'm typing in short bursts or blowing shit up in Rage 2 for hours on end, I rarely make a false move on the TactX keyboard. N-key rollover and anti-ghosting technology help bolster this claim. Better yet, along the left side of the keyboard are five macro buttons to which you can assign any keystroke, shortcut, text block or combination of keystrokes you want. On the right, you'll find a utilitarian numpad. Prepare to say goodbye and good riddance to that tenkeyless life forever.

The touchpad is less flattering. Sure, it lights up and has those left and right clickers everybody seems to love, but it's too small to navigate a 17-inch interface without repeatedly swiping your finger to the point of irritation. To command your cursor, you'd be much better served with the best gaming mouse, or the best Razer laptop for gaming.

Ports are plentiful on the Alienware Area-51m. On the right side you have your standard pair of USB 3.0 Type-A connections, and on your left is a third USB-A 3.0 joined by a lone Thunderbolt 3 port and a headphone jack as well as a separate input for mics. Sandwiched between the air vents, on the back is where the HDMI, DisplayPort and RJ-45 Killer E3000 (2.5Gbps) Ethernet are located.

Next door is an Alienware Graphics Amplifier port, in case you want to link up your internally upgradeable gaming laptop to an external GPU enclosure? Weird flex but ok. Apart from that somewhat baffling design choice, my sole port-related complaint has to do with the lack of USB 3.1 or 3.2 Gen 2. Why, again, are we stuck with dated USB 3.0 speeds on a multi-thousand dollar laptop? Either I'm being subjected to yet another dubious cost-cutting measure or an oversight on Dell's part. In any case, I don't love it.

Performance and verdict: Should I buy the Alienware Area-51m?

More than anything, what surprised me most about the Alienware Area-51m was its performance. Confidently, I assumed it would blow every other laptop I've reviewed out of the water in our entire suite of synthetic benchmark tests. In reality, its results suggest about a 15 percent advantage over the $2,499 Acer Predator Triton 500 in games that support ray tracing. In games that don't, the good news is that you can bank on much higher gains.

Given that its 8-core, 16-thread Intel Core i9-9900K desktop CPU is clocked at 3.6GHz (5GHz when Turbo Boost kicks in), I'm sure the Area-51m perform leagues better than the Triton's 2.2GHz (4.1GHz Turbo) H-series processor while streaming to Twitch or doing a bunch of CPU-intensive tasks at the same time. But for gaming alone, the difference in frame rate doesn't forgive its exorbitant price tag.

In the Metro Exodus RTX benchmark, the $2,000 less expensive Triton 500 managed an average of 56fps. Meanwhile, the Alienware Area-51m scored 65fps in the same test, and the Core i5- and RTX 2060-equipped iBuyPower RDY SLIIBG213, one of the best gaming PCs of 2019, did 61fps. Outside of ray tracing, a technology still in its early days mind you, the Alienware Area-51m outclassed every gaming laptop I've personally gotten my hands on.

In Tom Clancy's The Division 2, where the RTX 2080 (Max-Q)-furnished Razer Blade 15 saw an average frame rate of 75fps, the Area-51m achieved 107fps. In Shadow of the Tomb Raider, the Area-51m pulled in 119fps, putting Acer Predator Triton 500, which scored 83fps to shame. Other tests proved easy, albeit inconsequential for Alienware's performance beast. In PCMark 10, it beat out the Acer Predator Triton 500 by about 16 percent and the Razer Blade 15 Advanced Model by 36 percent. And that merely leaves me with more praise for Acer's exceptional thermals than for anything Dell has showcased here.

Powerful as it is, the Area-51m still gets hot and loud—not that it particularly matters since it's much too heavy to put on your lap—and its battery life sucks. 2 hours and 52 minutes of downstreamed video is nothing for a 90 watt-hour battery that needs two power comically sized bricks to charge.

If $4,500 is a lot to ask for a laptop, $3,959.99 isn't a whole lot better. Whichever price you pay for the Alienware Area-51m, it's too much, at least right now. Until we get a clearer indication of when the replacement GPUs are slated to launch, the Area-51m's one value proposition is undermined by the fact that we have no idea when it's going to be available for purchase. The Area-51m released four months ago. Enough time has passed that, by now, you could have bought the RTX 2060 model and saved up for an RTX 2080. Yet, four months on, that's still a pipe dream for current Area-51m owners.

In the meantime, after about an hour of tinkering, you can take out the CPU and pop in a new one. Or you can save time and money and just build a desktop.

Marketed for its "unprecedented upgradeability," the Alienware Area-51m is more of a promise than a final product. While supremely high performance, it lacks the one killer app needed to thrive among the more powerful desktops and more affordable laptops it aims to usurp.