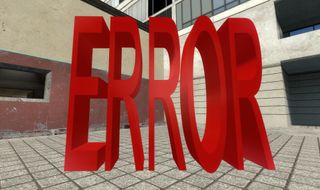 When the error model shows up in a mod or a map they're pretty hard to miss. But it looks like even Valve itself, on the cusp of releasing a new Half-Life game, can still fall victim to the notorious Source Engine error model. Just yesterday Valve announced the release date for Half-Life: Alyx, and accompanying the announcement on Twitter were a handful of beautiful new screenshots. Here's one of them:

Lovely! But if you enlarge the image and look at the top left-hand corner, you can see a Source Engine error model sticking into frame. A quick glace might suggest it's some sort of sign on the building, but it's not. It's the good old error model. Hello, old friend.

Somewhat appropriately, being a Half-Life game, you can only see the lower half of the model. But it's there!

Valve's Brad Kinley confirmed the error was in fact an error on Twitter, noting that "I guess at least it shows they're not bullshots!"

Luckily, there's still some time for Valve to make sure all of its models load properly—Half-Life: Alyx will arrive on March 23.