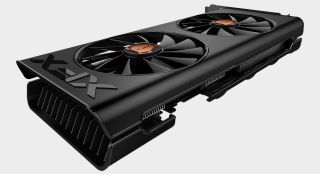 Whether or not this one gets removed as remains to be seen. It's a "staging" article, so at least on the surface, XFX prepped the details in anticipation of making it live at a later date. It could also be a faux leak—why should ASRock get all the attention, right?

Either way, the product page offers further credence to the upcoming card's rumored specifications. Namely, it's listed as having 2,304 stream processors and 6GB of GDDR6 memory feeding data through a 192-bit bus. Given that the same specs have now appeared in two separate premature product listings by two of AMD's hardware partners, it's highly unlikely they are wrong.

What we are looking at is essentially a cut down version of the Radeon RX 5700. The 5600 XT wields the same number of stream processors, but with less memory, a narrower bus, and slower clocks.

To compare, here's a look at the leaked Radeon RX 5600 XT specifications:

Both the XFX and ASRock listings are for overclocked models, though based on other leaks (and specifically one of two MSI 5600 XT models), Videocardz reports the stock clocks to be 1,130MHz (base), 1,375MHz (game), and 1,560MHz (boost).

Pricing will be key as to whether the 5600 XT take its place among the best graphics cards for gaming, as is typically the case. Here's a look at the MSRPs for AMD's existing Navi lineup:

The 5700 has an MSRP of $349, though the lowest priced models on Newegg selling for $329.99. Otherwise, these cards pretty much sell for what AMD recommends. Based on the above, I would anticipate the 5600 XT debuting for around $299, unless AMD revamps its pricing structure across the board.

We'll find out soon enough—AMD is planning a press conference at CES on January 6 at 2:00 pm PT.