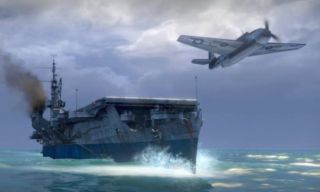 Wargaming.net is holding another World of Warships beta weekend, and this one will feature the addition of a major new feature: Aircraft carriers have finally arrived.

These floating garages have the ability to launch three types of aircraft squadron into battle—fighters, dive bombers, and torpedo bombers—and, just like their real-world counterparts, promise to dramatically change the balance of the game. "Now you can finally witness the rock-paper-scissors dynamics of the game when battleships, cruisers, destroyers and aircraft carriers clash on the high seas," Wargaming.net wrote.

The beta weekend will also see the addition of Japanese battleships Yamato and Nagato, the cruiser Mogami, and the destroyer Shimakaze, while the US side will get the Pensacola cruiser, the Fletcher destroyer, and the Essex aircraft carrier. Crew mechanics have been "reimagined," while modernizations will enable ship improvements to suit particular styles of play, and players may now fight alongside one another in "divisions" of up to three people.

The "Wings Over the Water" beta weekend begins on January 23—that's Friday—and runs through January 25. To find out more about the game before you leap into the fray, have a look at our pre-flattop hands-on from September.