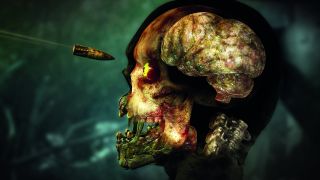 Alex Spencer has been playing Zombie Army 4: Dead War, an appropriately braindead game about headshotting zombies in slow-motion. Probably heaps of fun with the right friends, but no replacement for Left 4 Dead 2, a game I've kept installed for years on the off-chance someone wants to play.

Joanna Nelius has been playing Theme Park Inc, aka SimCoaster. These old classics of the genre are much more like management sims than Planet Coaster, which means mostly what you're managing is an incredible volume of vomit. It's more fun than it sounds.

Alistair Jones has been playing Might & Magic: Chess Royale, the introductory autobattler that sees the cast of the Might & Magic games revived once again for a cynical cash-in, albeit a competent-sounding one. Lower your expectations enough and I'm sure this is fine.

Steven Messner has been playing Legends of Runeterra, which is here to tempt you into trying another free-to-play card game as if there aren't enough of those vying for your attention. Its economy, generous and based around chests and a free battle pass rather than booster packs, is a selling point as its relative lack of a meta. People apparently can't just buy all the best cards and build the ultimate netdeck, which sounds like a plus.

Jeremy Peel has been playing Wargroove's Double Trouble DLC, which adds co-op missions. You may be wondering how co-op works with turn-based tactics, and the answer is apparently "not very well". The last time I remember having fun with a friend in a strategy game it was a co-op game of Total War: Warhammer where we could "gift" units to the other player if one of us was in a battle against the computer.

I've finally been playing F.E.A.R. and enjoying the way it manages to be both good action and horror at the same time. A first-person shooter with bullet time and a solid shotgun doesn't seem like it would mesh well with creepy J-horror, and while the story is hokey (especially the ending) it manages to bounce between the two genres pretty smoothly. Now I see why it's a classic. What's up with Jin's arms, though? They're way too long and it's creeping me out.

Enough about us. What about you? Anyone playing Wolcen ahead of its escape from Early Access? Getting covered in leeches in Stoneshard? Kicking your way through the metal fantasy of Elderborn? Let us know!