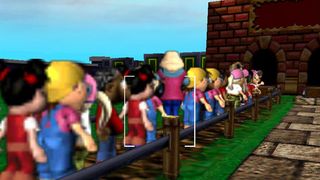 I placed hotdog stands too close to the entrance of my rollercoaster and now people are puking on the sidewalk. My janitors are threatening to strike because they can’t clean the puke up fast enough, but I chose to install bathroom security cameras to stop kids from setting off stink bombs instead. My janitors strike. The puke festers on the ground. People puke from the puke. No one ever said running a theme park was easy.

SimCoaster, known as Theme Park Inc in the UK, tests your ability to play PR, HR, marketer, and designer at the same time. You not only have to manage a robust employee roster of gardeners, security guards, janitors, engineers, and entertainers, but you also have to monitor guest satisfaction with every feature of your park, right down to every last plant. Do well, and you can expand your park into different themed zones, unlock new rides, and grow profits sky high. Do poorly and risk some stern words from unhappy shareholders—or worse, get fired.

There are a lot of similarities to RollerCoaster Tycoon, but Theme Park Inc has a more cartoonish feel, which is probably why my younger brother and I gravitated toward it instead when we were kids. It’s a complicated game with a lot of moving parts, going as far to offer you a full businss statistics menu, complete with a financial summary and a point-to-point graph that allows you to toggle on/off different categories, such as ticket sales and shop profits, that show your overall gains/losses over a one, three, and 12-year period.

You can even see how many people are in the park at any given time, too, and their arrival rate. I don’t know what it’s like to run a real theme park, but I imagine it would feel pretty close to this.

Theme Park Inc also breaks down your visitor statistics by age group, the average amount of money each group spends, what kind of rides they go on the most and their most dominant thoughts, which seems Orwellian in itself, since you can also click on any individual park guest and see how they are feeling or what they are thinking in a thought cloud above their heads. Each demographic is going to want different things, so creating an even amount of entertainment for each age group is the key to keeping everyone happy—and if everyone is happy, they are willing to pay more to get into your lovely theme park.

One easy way to boost guest happiness is to plant trees and shrubbery all over your park. People like looking at pretty things, and if they have a bad experience on a ride or at another type of attraction, a well-groomed plant will help take their mind off it. Of course, this will cost money, but it costs even more to keep these plants from turning into sad, brown husks.

Gardeners are a necessity in that case, and you can direct their work in a few different ways. You can let them roam the park and pick up work on their own, but that’s not efficient, and sometimes they’ll spend more time hanging out in the breakroom.

You can click on a plant that you want them to pay attention to and the nearest gardener will tend to it. Or you can become a micromanaging boss from hell and assign them to patrol a specific area. This is a great deterrent against children lighting your plants on fire (Theme Park Inc’s children are pyromaniacs), but it’s a quick way to drive down your gardening staff’s morale.

You can control the other park employees the same way too. I ended up putting the most employee wages toward security, since those dang kids kept playing pranks and setting off stink bombs in the bathroom. Most of the time the guards catch the delinquents, with the help of some strategically-placed security cameras, but you can also click on the kid to summon a guard to their location. Once a guard catches up with them, they stuff the kid in a beige sack and toss them out of the park. This method also works on adults and elderly patrons who complain about your establishment to other guests. The game will actively encourage you to ‘deal’ with them, and I have no problem with that. Years of torturing families in The Sims 3 and 4 have hardened me to the point that even giving old grandmas the boot no longer fazes me.

Of course, if you overwork your employees, they’ll strike until you raise their wages. Thankfully, you don’t have to worry about other legal necessities like health insurance and workers compensation, but equally real theme park managers probably don’t have to deal with their janitorial staff downing mops after a kid stink bombed nine of your ten bathrooms. Luckily Theme Park Inc will let you raise their wages as much as you like... even if it drives your theme park into ridiculous debt.

Another important part of retaining employees and growing your park is giving them extra training. Janitors can’t put out fires if they haven’t been on a firefighting course, and you can’t expand into certain areas if you don’t have an engineer that can blast through rocks. More training means more responsibility, which means they’ll naturally ask for even higher wages, but you’ll do the right thing and pay them what they deserve, right?

Besides managing guests and employees, winning challenges is the most crucial part to running a successful theme park. They allow you to expand your park to three differently themed lands, and unlock new rides and concession stands.

The Land of Invention is where you start Theme Park Inc, a plush green landscape bordered by a bright blue river. After completing challenges to expand that section you unlock the Polar Zone, a winter wonderland that inexplicably includes an octopus ride as part of its theme. The final section you gain acccess to is Arabian Nights, which is a stereotypical Middle Eastern land—with its snake charmers and scarab go-kart rides, it does feel a bit... old-fashioned in 2019.

But when the decor isn’t abrasively mashing different cultures together, it looks darn cute. Every time you build something new it springs up like a building in a pop-up book. Every umbrella, windmill and telescope move dynamically. You can even hop on one of your roller coasters in first person and see everything you’ve built from above.

And the best part about running being the boss is hiring scientists to research new rides for you. After you complete enough challenges and earn enough money you can choose what type of ride you want them to design next, whether it’s a bone-soaking water ride or a little arcade game that’s easy on grandpa’s sensitive heart. The core of any theme park is pulling in guests with some cool, new attractions, and Theme Park Inc lets you build so many of them.

Not only that, any coaster-type ride, a traditional coaster, water ride, or go-kart track, is fully customisable; you’re only limited by your imagination and the amount of space you left yourself to build it. Build loops, tunnels, bridges—just don’t do what I did and put all the concession stands near the roller coaster with three loops and a long corkscrew. A vomit-soaked theme park is the quickest way to drive down profits.

Theme Park Inc wouldn’t be a complete theme park management sim without some appropriate challenges—oddly, these only start once you manually activate them. You’ll find yourself taking advantage of a heatwave and pushing up the prices of ice cream and cold drinks. When it rains, jack up the prices of umbrellas and hot food. Certain challenges you’ll have to complete as part of a larger objective, which mostly has to do with expanding your park or getting promoted. But there is little room for error—fail a few challenges and it’s game over, you’re fired. A lot of the challenges repeat, though, at least in theory.

Both the Land of Invention and the Polar Zone each have an overstock challenge in which you must sell a certain number of hot dogs and drinks in a certain matter of days, respectively. One is easier than the other, but if you get crafty with the settings of each individual food and drink stands, you’ll psychologically trick your guests into purchasing exactly what you want them to purchase. The fries stand, for instance, allows you to change the amount of salt they have on them. Super salty fries will drive people to buy more drinks, which will drive up those profits.

You can also build info kiosks around the park to advertise specific concessions stands to drive more people to them.

There are many more nuances to Theme Park Inc, and I feel like I’m discovering them over again as I play through this 18-year-old game. It’s still as involved as I remember it, and I’m still a terrible business owner, but I don’t mind. I will always enjoy kicking out the little pyromaniacs that keep setting my plants on fire and riding my own roller coasters in first-person mode.

Joanna Nelius
When Joanna's not writing about gaming desktops, cloud gaming, or other hardware-related things, she's doing terrible stuff in The Sims 4, roleplaying as a Malkavian, or playing horror games that would give normal people nightmares. She also likes narrative adventures.
See comments