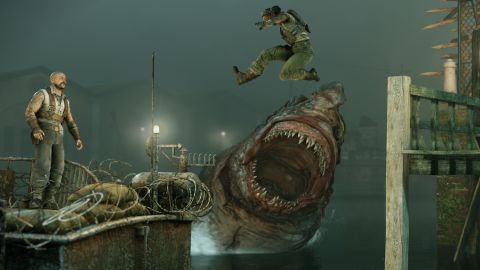 An excellently-crafted shooter, especially with friends. Just don’t expect much in the way of brains.

What's your eighth favourite snack? You know, that one you'd never actively buy unless it was on a particularly aggressive offer but, when left alone with a packet, you'll absent-mindedly eat until your fingers reach for the next and find only crumbs. I want you to picture it as clearly as possible. Now, imagine your cupboards are filled with it—and that's what playing Zombie Army 4:  Dead War feels like. Especially if the snack in question happens to be delicious braaains.

In this analogy, the feeling you get as you chomp down—that beautiful weightless moment before the regret and mild tummy ache and the memory that you have a family history of diabetes—is clicking the left mouse button to fire your weapon and hearing the satisfying squish of another zombie's cranium exploding. As gaming pleasures go, it's not quite on a par with the solution to a fiendish puzzle clicking into place somewhere in the bottom of your brain or the explosion of possibility that comes from trying something stupid and getting a response that shows the developers saw you coming. But it is certainly very moreish.

Over the fifteen years and six games that have led to this point, starting with 2005's Sniper Elite, Rebellion have honed this one moment to its sharpest possible point. The kickback on a submachine gun weapon, each shot punching your reticule higher and closer to that all-important headshot, has all the mass-produced genius of a Jaffa Cake's sponge base. The way zombies tumble quivering to the ground when you hit them with an electrified bullet, delicious as just-slightly-dark chocolate. And pushing in with your sniper scope, framing a distant face in intimate close-up, then watching as your round whizzes in slow-motion from the chamber, out across the level and then into their eye socket, through the squishy mass of brain, and out the far side of their skull? You'd better believe that's the ambiguous gelatinous orange filling—the dirty little thrill that is, as much as you'd be ashamed to admit it, what you're here for in the first place.

There's nothing wrong with a few empty calories now and then. But then you look back to the metaphorical cupboard, and realise… it's still full. There are another couple of hundred zombies between you and the level exit, and beyond that nine chapters' worth of campaign, each of them a few hours long. Then a horde mode, the weekly challenges that add fresh modifiers to familiar levels. And, the big innovation for this latest instalment, a hundred levels of character perks, weapon upgrades and unlockable cosmetics to chew your way through.

It'd be churlish to say there's too much of Dead War—Rebellion has clearly built this game to last, keeping in mind those players who crave endless undead to pour bullets into, making sure they're fed until the next one comes shambling along. And it never gets boring, exactly. The game does a great job of switching things up: in one chapter, you go from a boat ride through Venice to defending a base from zombies that drop from the sky, sans parachute, and finally all-out war in a waterlogged arena where you can feed enemies (or, as I learned, friends) to an undead shark.

Let's linger on that shark for a moment, because why the hell wouldn't you? It's one of the many traps that litter every level, alongside your common-or-garden explosive barrels and precariously dangling weights that can be shot loose to squish any zombies below. In co-op, they're one of the few things that cause friendly-fire damage—and not only that, they tend to be insta-kills, with no chance for a revival. I'm not saying exactly how I found this out but suffice to say that, if you ever want to end a decade-long friendship, try sucking said friend into the spinning blade of a turbine, turning their carefully customised character into mincemeat.

Traps are one of the many ways Dead War switches up the rhythm of its violence. The kill-cams, with their cutaways to the inner workings of your latest victim, help punctuate the action—boom, boom, SQUA-SQUISH, boom—but more important are the various special attacks that charge up as you play. There's a powerful melee attack on a constant cooldown timer, replacing your usual ineffective shove with a machete slash or Thor-style hammer strike. Getting 10 kills with a particular weapon will activate its special ability, which might be slowing down time or handing you a few guaranteed headshots. And if you manage to chain 10 kills together in a combo, you can pull off a Takedown, a gruesome one-hit melee kill that rewards you with some health, similar to Doom's Glory Kills.

The threats you're dealing with vary too. As well as your rank-and-file shamblers, there are commanders who can resurrect their underlings, nimble roof-hopping snipers and those guys who run towards you screaming then explode, having apparently sprinted all the way here from Serious Sam. There's even a literal meat wagon to contend with—half-track APCs with gooey pink flesh between its armour plates and a hatch that opens to reveal some unnervingly human innards. These foes mean your reticle has to frequently wander away from standard head height, because weak points can vary from explosive hearts to back-mounted fuel tanks.

Ultimately, though, the game is made up of small variations on that same snack-size experience, repeated over and over again. A limited-edition lemon-and-lime Jaffa Cake is still, at the end of the day, another Jaffa Cake, y'know? And you start to suspect Dead War knows it, because it's constantly trying to distract you with the glint of something shiny. Which, most of the time, means a number getting gradually bigger and bigger.

Every kill has a point value; pull off a few in quick succession and the game will apply a combo multiplier to your score. In multiplayer, this quickly overwhelms the rest of the game. It's possible for one player to get exponentially ahead of the others, which can quickly turn co-op into something more competitive. I'm not saying that I intentionally sucked my friend into that rotor engine, but… um, does anyone know a good lawyer?

At the end of each section, your point total is converted into XP. There are ways to earn bonuses, like finding collectibles and completing section-specific challenges that ask you to kill a few dozen enemies with fire or feed them to a shark or land headshots while your boat is in motion. From there, XP pushes you up through levels, which open up your abilities back in the game and make it easier to rack up high scores. It's an airtight loop, one that is perfectly compelling when you're inside of it—but it's worth remembering that something being airtight doesn't just mean oxygen can't escape. It also means fresh air can't get in.

Stepping back from a hours-long session of Dead War can get a bit existential. At time of writing, I've murdered a small town's worth of zombies. One night, in the midst of it all, I lay awake in the dark with my brain still busily sorting through the act of lining up a shot and pulling the trigger, like a much gorier version of the Tetris Effect. Thank God I'm already thoroughly desensitised. It's not the violence that disturbs me, but the feeling that I could see the game laid out flat, a conveyor belt of perfect slow-motion headshots stretching out into infinity in front and behind of me.

This feeling pretty much goes away when you're playing with others, the same way it feels better to split a bottle of wine. I'm not even sure Dead War is a better game with more players—the impact of each player's actions quickly gets lost in the chaos, so you rarely know which shot caused that zombie's head to implode—but it makes for a good accompaniment to chatting the same kind of nonsense you normally would around a sticky table top in a pub. Feel free to mentally add a couple of points onto the score for every mate you reckon can be won over with an Evil Dead-style "join us".

And, of course, even playing on your own, you could make Dead War part of a healthy nutritious diet. Much like that packet of whatever snack food you've been imagining this whole time, you don't actually need to eat the whole thing at once. You could enjoy a sensible amount of its beautifully realised high-definition ultraviolence, put it down, come back later, have a few more nibbles. But you won't, will you? You'll always have another, and another, until you feel bloated and dizzy and a little bit sick. And fair play. January's over now, which means we all can shed the pretence of our New Year's resolutions and give in to the hungry zombie within.

An excellently-crafted shooter, especially with friends. Just don’t expect much in the way of brains.