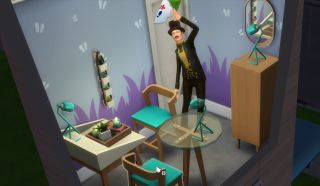 Christopher Livingston has been experimenting with the Tiny Living expansion for The Sims 4, trying to combine rooms in unlikely and unhygienic ways while also living in a neighborhood full of stray dogs, which is an option. This just reminded me how annoying the welcoming committee is, all your neighbors rocking up to waste your time when you haven't finished getting your house all set up nice. The jerks.

Fraser Brown has been playing Warcraft 3 Reforged, and while his review isn't finalized yet he certainly has some thoughts: "During the beta, getting into a game wasn't always guaranteed, and micro stuttering has been a persistent problem for a lot of players. It's not clear what has been fixed now that it's hit 1.0. The latest patch notes only show what's been added, not what bugs have been squashed. There is, however, a list of known issues. I played some games after launch last night and didn't notice as much stuttering, but it was unbearable when I tried playing on a larger map this morning."

Diego Arguello has been playing Disco Elysium, and enjoying how much it lets you fail at skill checks and then just carry on. You can be a loser in ways that are funny or illuminating, and sometimes more enjoyable than success. It hadn't occurred to me that some players might not get this, might keep reloading and trying not to fail. It's one of the many ways Disco Elysium resembles a tabletop RPG, where failure isjust something to laugh about and move on from.

Rachel Watts has been playing Temtem, and declares it to be even better than Pokemon. It's still in Early Access of course so there's time for things to go south but it does seem to be doing very well so far. Crazy to think that it came from the same indie studio responsible for a first-person shooter called Immortal Redneck.

I've been playing Condemned: Criminal Origins, which is Monolith's horror game from 2005 in which you beat up about a million homeless people and drug addicts. It's an odd one, a game where you're chasing a serial killer by waving your magic CSI tools over crime scenes one minute, then ripping a pipe off the wall to murder a junkie the next. It's definitely going for a Silent Hill vibe but then it turns into a melee action game where disadvantaged people are zombies. It came out on console the same year as Monolith's F.E.A.R., which did a much better job combining horror and action.

Enough about us, what about you? Have you been catching 'em all, by which I of course mean all the Temtems? Has anyone tried Early Access medieval city-builder Foundation? How about the hilarious Speaking Simulator? Or have you been playing Farming Simulator 19 since Epic gave it away? Let us know!