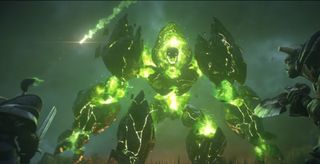 After a bit of a delay, Warcraft 3: Reforged has at last been let loose, remastering the pinnacle of Blizzard's real-time strategy series. It's been nearly two decades since the original first graced our doorsteps, but few RTS games since have been able to claim such enduring popularity. With none of the campaigns made available before launch, however, you're going to have to wait for my full review; in the meantime, I've spent some time snacking on the multiplayer and will hopefully be able to tide you over with my early impressions.

For the uninitiated, Warcraft 3 features the familiar RTS formula of resource gathering, base building and clashing armies, but with two Warcraft games already behind it in 2002, Blizzard decided to throw in more ingredients—most important among them, heroes. Each faction has a few, all with unique spells and abilities. By getting into PvE encounters at monster camps and spending gold at the shop—which you'll need to build first—these heroes can then be decked out with powerful gear and earn XP. If they're killed, you can just recruit them again.

With heroes being the focus, Blizzard reduced the number of units you can directly control at once down to 12—a total that has not been changed for Reforged—so you're micromanaging small-ish squads rather flinging big blobs at the enemy. You can recruit a lot more than 12 units, of course, but food caps and upkeep costs mean you're not going to be fielding massive armies. The heroes make you feel powerful, but the smaller number of units make mistakes more costly and the consequences more immediate. You can lose everything in just a few clicks. On the flip side, it doesn't take long to rebuild your army, though the enemy could be in your base by then. All of this remains true in the new version.

Warcraft 3: Reforged isn't quite as straightforward a remaster as Starcraft Remastered, but it's not a remake, either. Despite the new art, map changes and UI tweaks, this is still classic Warcraft 3 through and through. Indeed, Blizzard has even scaled back the planned scope of the changes, which originally included retconned lore and new cutscenes. This has split the community. Some favour the more conservative remaster treatment, while others had hoped for more new stuff given the absence of a modern Warcraft. I'm one of those a bit disappointed that it's so restrained.

Going from the original to the new version, the visual transformation of units and buildings is absolutely noticeable, but if it's been years since you last clapped eyes on it and still have your rose-tinted goggles on, it may look a lot more like you remember it. The aesthetic is more in line with World of Warcraft, so you should feel right at home if you've spent years questing in Azeroth. There are big shoulders abound! The unit models are considerably more detailed and varied, benefiting greatly from the growth of Blizzard's character design chops, though that comes at the cost of a bit of clarity. They're visually distinct from each other, but in the heat of battle it can be hard to make sense of the scrum. There's just a bit of sensory overload. Despite this, I just can't go back to the old models after seeing their flashier counterparts.

I'm less enchanted by the maps themselves. I have no complaints about the design, but visually the upgrade seems rather slight. While the art is new, Blizzard may have erred too much on the side of caution, maintaining so much of the original's look that at times the only obvious difference is higher resolution textures and much better lighting. It looks less like a stylistic choice and more, well, dated.

It's strange returning after so many years away. Warcraft 3's multiplayer scene has continued, but I've been absent for a long time. Like StarCraft, it's all about speedy clicks, practised build orders and relentless momentum, and I'm definitely out of practice. The addition of hero units and other RPG elements, Warcraft 3's hook, also complicates things. Sometimes it can trick you into thinking this is a leisurely game where you take your squad of monsters and soldiers on a rollicking adventure around the map until you're confident enough to bring the battle to your enemy's base. In reality, however, it's a fast-paced arms race.

These days, I much prefer a laid-back comp-stomp, but Reforged is now dragging me back to the days of caring about being good—browsing videos, jotting down build orders, trying to figure out how to get X upgrade on Y unit faster. This is easier said than done when you're fighting players who aren't lapsed (or just crap), but there's still something exhilarating about trying to crack the formula. Thankfully, what worked in the original still works here. While Blizzard has released several balance patches throughout the beta, and will undoubtedly keep doing so, the Alliance, Horde, Scourge and Night Elf factions seem to be much as they have always been.

This is excellent news, as Warcraft 3 boasts some cracking faction design and a roster full of exotic units that almost always have something to offer besides being cannon fodder. The distinct factions means there's a lot to learn—again, in my case—and even within a single faction there are so many directions you can go in, so many upgrade paths, so many heroes and hero combinations to build your army around, that it can be tricky to retain it all. Hence the aforementioned note-taking.

I'm an orc man myself. What can I say? I like musky, muscular brutes in my strategy games. The Horde's got some meaty bruisers in its ranks, but the last build I fiddled with ditched most of the burly boys and their penchant for melee in favour of a more ranged build full of trolls. It doesn't play to the faction's advertised strengths, but that's part of the fun: experimenting, finding new things to like about a faction, and then getting steamrolled because you really should have tested it more against the AI first. Oh well! Lesson learned.

During the beta, getting into a game wasn't always guaranteed, and micro stuttering has been a persistent problem for a lot of players. It's not clear what has been fixed now that it's hit 1.0. The latest patch notes only show what's been added, not what bugs have been squashed. There is, however, a list of known issues. I played some games after launch last night and didn't notice as much stuttering, but it was unbearable when I tried playing on a larger map this morning.

There have been a few other hiccups, too. It took me several attempts to get custom games working, though once they kicked off I didn't encounter any more trouble. The ability to load custom saves has also been disabled, though it will apparently be added in a future update. Other players have reported matchmaking issues, an inability to create games and problems with logging in. Blizzard said that it was investigating some of these issues last night.

I'm about to start my misadventures in the campaigns, which is really where my heart lies, but I'm a little more ambivalent than I was when Warcraft 3: Reforged was just an exciting prospect. I'm still waiting for that lightning bolt, that moment when I realise this is why Warcraft 3 was plucked from the past and brought to 2020—beyond the fact that Warcraft 3 is still a great RTS, something that's sorely been lacking lately. But maybe that's enough? Good thing I've still got a few days to come up with an answer.