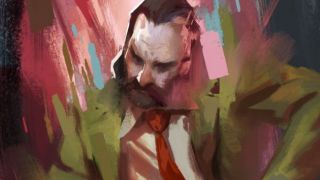 "I want to have fuck with you."

This is just one of the many embarrassing lines that came out of my mouth after failing a dialogue option in Disco Elysium. My character was barely standing, trying to come to his senses during the worst hangover in history. Pieces of his mind were now loose, arguing with each other and mocking their host. In another corner of this unshackled subconscious lied the Thought Cabinet, recording feelings and mementos that can evolve over time. In my experience, it also served as a reminder of past mistakes.

Both my character’s thoughts (which are skills in disguise) and RNG are to blame for my verbal atrocities, despite the fact that my character was already a mess. Everything from dialogue to mental and physical interactions in Disco Elysium have randomized outcomes dictated by dice throws. Leveling up the fragments of your mind can provide leverage and some actions can be repeated several times, but others happen in an instant, and you will likely face a risky situation unprepared more often than not.

It’s in the mundane tasks that Disco Elysium's dice rolls thrives the most. Before heading out of his room, I attempted to grab a tie stuck in the ceiling fan and was injured so many times that I had to stop trying to avoid actually dying. The frustration was tangible, and I quickly realized that these skill checks played a big part of the experience. Worse scenarios than the rogue tie would follow, like the one involving the woman in the corridor.

I’m a shy person, not the kind to deliver pickup lines minutes after meeting someone. But there was something about Disco Elysium’s main character, struggling to get a grasp of reality while also being tangled around misery in its most livid form, that pushed me towards flirting when I saw the dialogue option. Of course, the outcome would have been completely different if I hadn't failed the odds. As the inner voice of Suggestion warned, it was already too late. "The words have already left your mouth…"

She laughed in my face after I mumbled history's worst pick-up line and asked me to repeat it. I chose the dialogue option with the correct sentence, but she then asked to hear my first mistake one more time. The embarrassment was worse than losing a health point or getting locked out of a quest. Ten minutes in, and I was already a complete buffoon.

And then she said something that stuck with me after I apologized: "Don't be, it was funny. And, anyway, who gives a shit? Who gives a shit about any of it?"

Anyone who has ever played an RPG would likely expect repercussions for their actions as the story progresses, especially after such a vulgar introduction. A character who now dislikes me? A potential story path shut off? But that clearly wasn't Disco Elysium's style, and I didn’t consider reloading a previous checkpoint. This was already part of my character, for better or worse, so I stuck with it.

Hours later I was trying to do some real detective work alongside Lieutenant Kim Kitsuragi, my sidekick in Disco Elysium, who happens to have almost the exact opposite persona of my intellectual Frankenstein's monster. After too much time procrastinating, Kim and I went to investigate the crime scene we were here for: a body hanging from a tree.

I tried to inspect the body three times. The first failure was on me, since the odds were below 30% and I took the risk anyway. I puked. My partner then suggested using ammonia to deal with the horrid stench, but it only made things worse. I still couldn't get close to the decaying body. The dire need to compose myself evolved into a case for my Thought Cabinet, fittingly called "Volumetric Shit Processor," in case you were still wondering if this was an ordinary RPG.

I had to roam around for half an hour and try again with my mind fresh. My character felt sick once more on his third attempt. It was clear that I needed to level up my Endurance, so I took on side cases until I had gained enough experience.

At last, the odds were on my side at 73%. I sat back in my chair and relaxed, waiting for the new dialogue to roll over and put all these setbacks behind me. Another roll of the dice—and another failure.

"No, this is a two-man assignment, because it needs two officers to complete. I need your help," said Kim, exhausted from the whole situation. He then looked my character in the eye and added: "You need to keep your shit together."

Failing the odds in Disco Elysium is the most refreshing change of RPG design I've experienced in years. Instead of relying on a karma system to dictate whether or not I’m doing something wrong, mistakes are sporadic and, frankly, expected. They're not dead-ends. In both of these cases early in the game, failure at the hands of RNG ended up taking me down more interesting story paths. Even when I know the odds are on my side, there’s still a chance of being surprised by the outcome, consequences and absurdity lingering in my mind long after I stop playing.

These moments present challenges to overcome that are unique to each playthrough. Not having control over the most mundane actions is exactly what shapes the character. There’s never a simple solution, and while failing often is a given, it makes victories feel much more meaningful. Besides the successful skill check, a flash of green across my screen, it feels like my character has learned from past mistakes, growing in the process.

I still think about my bold move with the woman in the corridor, and I worry about messing up around every obstacle that I stumble upon. But mistakes are bound to happen no matter what, even if it's uncontrollable RNG that makes me throw up three times in a row on the same day. I’m sorry, Kim. Let’s give it another try tomorrow.