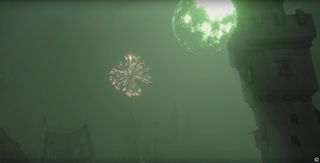 Full details about the DLC's content will be announced at GamesCom, but for now we know it’s titled Shadows over Bogenhafen. In addition, a brief announcement trailer offered a snapshot of a moonlit town swathed in a soupy fog, while fireworks popped in the distance.

“We are kicking off the fall with more content to Vermintide 2”, said Fatshark’s CEO Martin Wahlund. “[In the] last week of August, the players will be invited to Bogenhafen, a city where the Heroes will be tested like never before by Grandfather Nurgle's unpleasant attentions”

PC Gamer’s Steven Messner found Vermintide 2 to be much improved over the original when it launched in March this year. You can watch the announcement trailer for Shadows over Bogenhafen below.