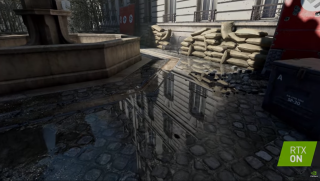 Bethesda and Machine Games have announced that Wolfenstein: Youngblood now has Nvidia’s RTX ray-tracing and DLSS technology integrated, with predictably gorgeous results for the game’s visuals. The update is available now and works for those with a GeForce RTX 2060, 2070, or 2080 GPU. The RTX improvements are immediate, with reflections popping up on surfaces all over the game. The NVIDIA DLSS’s impact is less immediately apparent to those not intimately familiar with the game’s looks, but the Deep Learning Super Sampling is like as not doing its job if they’ve finally released it to the public. Here’s the look:

This is the second major update for Wolfenstein: Youngblood in as many months, with developers adding a new endgame mission, areas, and enemies in November. PC Gamer’s reviewer wasn’t quite as positive in our Wolfenstein: Youngblood review as about previous installments in the new series, but it’s still a pretty good game, and now it is also a pretty good game. Get it? Get it?

I’ll see myself out. Meanwhile, you can find Wolfenstein: Youngblood on Steam and Amazon and hell, even the Microsoft Store, and probably a bunch of other places too.