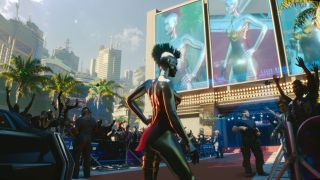 Obviously Cyberpunk 2077 is what a lot of people are looking forward to right now, but let's not forget this is also a year with new Half-Life, Doom, Halo, and Bloodlines games coming out. And there are plenty of smaller games worth being excited about too (shout-out to Boyfriend Dungeon and Get in the Car, Loser). We've got a list of the New games of 2020 of course, if you need a reminder.

What unreleased game of 2020 are you most looking forward to? Here are our answers, plus some sourced from our forum.

Jarred Walton: I'm not going to say Cyberpunk, even though it's probably Cyberpunk. Right up there with dystopian cyber-futures, however, is my love of the post-apocalypse, going back to the granddaddy of them all, Wasteland. Wasteland 3 moves the series out of the deserts and into the snowy mountains of Colorado, my old stomping grounds—I was born and raised in the shadows of the Rockies. The Patriarch sounds like a really nice guy, and I'm sure we'll get along just swell, considering my native roots. Maybe we can go skiing?

Anyway, I backed the game on Fig and have been following its development for the past several years. I'm cautiously optimistic that the Microsoft buyout will be a good thing, giving the creators more time and resources to make a big world for me to explore. And with the Cyberpunk delay, I'll need something to tide me over until September.

Christopher Livingston: I keep wavering on my excitement for Half-Life: Alyx. Yes, I definitely want more Half-Life, but the prospect of spending 15 hours with a headset on to get it isn't exactly thrilling me. And while I'm absolutely ready for Mount & Blade: Bannerlord, I'd have to say the game I'm most excited about this year is Crusader Kings 3.

I love CK2, and I don't think any other game has left me with such engaging and engrossing personal stories about my characters, and I love personal stories more than grand, sweeping adventures (though it's great to combine the two). So I'd put CK3 first, followed closely by Bannerlord, with Alyx in third place.

Andy Chalk: Yeah, Cyberpunk and Bloodlines 2, but one I'm really hyped for that's sort of off the radar is Serious Sam 4: Planet Badass. I love it for the title alone, because it so perfectly embraces and encapsulates the inherent dumbness of the whole thing, but I'm also really excited to see what Croteam has cooking.

Ridiculous guns and hordes of screaming enemies charging over wide-open landscapes are obvious, but it's been nearly a decade since Serious Sam 3: BFE (time flies, right?) and so there are bound to be some enhancements and new features. And even if there isn't, so what? Sam grows, but he doesn't evolve, and there's a certain kind of purity in that. So even if it's just bigger, prettier, and more, that'll be perfectly fine with me.

Lauren Morton: Mimimi's previous stealth tactics game Shadow Tactics was fantastic by my book. I consistently tell folks how much I enjoyed their samurai homage to Commandos and Desperados so I can't wait to see what they do with the reins of the series in hand. I thoroughly enjoyed stalking through its level designs and managing the skills of my party members to pull off simultaneous quadruple kills.

Desperados 3 doesn't have a confirmed 2020 release date but Mimimi held a closed beta test for it last autumn which gives me hope we'll see it before the year is out.

Jody Macgregor: Bloodlines is one of my favorite games and I vote for it in our Top 100 every year, so yeah I'm pretty excited for the sequel. But after playing a demo of Boyfriend Dungeon at PAX Australia I am also looking forward to the hybrid action-RPG/visual novel. It's such a good idea for blending the pacing of two genres, one of which could do with some breaks and the other sometimes wants for a bit of action, as well as just being a funny concept.

Morgan Park: Nobody is really talking about Rainbow Six Quarantine, but I think it could be a 2020 sleeper hit. The new Rainbow Six spinoff is based on Siege's limited-time PvE Outbreak event from 2018. That mode was a short campaign that played like Left 4 Dead wrapped in Siege's precise shooting and destruction. It was a ton of fun, and fans loved it enough that Ubisoft greenlit a standalone game. I don't expect Quarantine to truly replace the specific zombie-slaying zen of L4D2, but if Valve won't make another one, I'm glad a big-budget game is going for the throne.

Zloth: It's just got to be Cyberpunk. Witcher 3 was incredible, IMHO, so I'm really looking forward to CDP's next game. (Even if I don't buy it until 2021.)

OsaX Nymloth: Dying Light 2 - first one was literally tons of fun in co-op and just imagining being back at trashing zombies around with the squad, feelsgoodman.

firefly: Probably Dying Light 2, and probably Cyberpunk. There are a ton of Early Access games I would like to see finally get released, too.

I Will Haunt You: It's so easy to say Cynerpunk 2077 or Dying Light 2 or Bloodlines 2, but the one I get most excited thinking about would be Maneater.

Sarafan: I'm waiting for Alaloth: Champions of the Four Kingdoms. It's an indie RPG developed by a small Italian studio called Gamera Interactive. The game combines classic, isometric experience with soulslike combat system. It's worth mentioning that Chris Avellone is involved in its development process. We can expect a good story and very interesting battles.

Krud: The only game I've been looking forward to for the past three years is Cyberpunk 2077. I was frustrated when it got delayed, but as many have said before me, better late than buggy. (Now if it shows up late AND buggy, then a conversation needs to be had...)

Honorable mention goes to Bloodlines 2, as I'm not entirely convinced it's the game I'm hoping it will be, but I hope to be proven wrong in my skepticism.