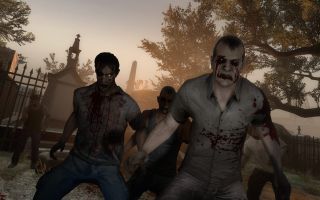 The klaxons sounded earlier today when HTC China president Alvin Wang Graylin shared a few slides from his recent talk on the future of VR, including one that said, "Valve HL Alyx/LFD3 will drive consumer and AAA studio interest." The acronym isn't quite right, but the reference to Left 4 Dead 3 was obvious.

A few slides from my talk tonight... pic.twitter.com/bHegijjZW1January 17, 2020

There was an initial jolt of excitement—surely a highly-placed executive at HTC would have an inside track on this kind of thing, right?—but it was all very thin and out-of-nowhere, and people quickly began to theorize that Graylin's source was actually the highly-speculative Valve News Network site, a theory bolstered by this tweet from December 2019.

It seemed weird to me that an HTC president would go out on a limb like that based solely on a VNN report, but some of his other bullet points were pretty pie-in-the-sky too: "AR/VR connected 24/7 to AI Cloud will make humans super intelligent," for instance, or "Elderly will use VR to re-enter work force and travel the world."

However accurate or inaccurate those predictions prove to be, we can say for sure that the one about Left 4 Dead 3 is way off the mark.

"We’ve seen rumors to this effect for the last couple of months. We did briefly explore some Left 4 Dead next opportunities a few years ago. But we are absolutely not working on anything L4D related now, and haven’t for years," Valve said in a statement sent to IGN.

"It’s clear some people are having fun creating misinformation to spin up the community and other outlets. Unfortunately, for now a new L4D game is not something we’re working on."

Sorry, everyone. But if leaks and rumors are your thing, we've got a roundup of all the Left 4 Dead 3 scuttlebutt we've run across over the years that you can dive into right here.