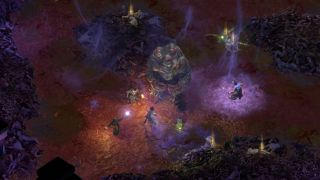 Pillars of Eternity 2: Deadfire’s nautical misadventures come to an end next month, lamentably, with the launch of the final piece of DLC, the ominously titled Forgotten Sanctum. With it comes a new island to explore, a dungeon to fight your way through and the archipelago’s best-kept secret to uncover.

Here’s the skinny: A wizard has found a dungeon built into the flesh of a napping god, and now a group of adventurers—that’s you—have to hunt down the wizard to stop them from waking up said god and devastating the Deadfire Archipelago. Just a normal day at work for the Watcher of Caed Nua.

The Forgotten Sanctum will throw new quests at the party and send them into the dungeon to face high-level encounters, and it’s accompanied by the free 4.0 update, introducing new mega bosses and god challenges for sea-faring adventurers to tackle. Mega bosses are, not surprisingly, end-game fights for seasoned parties, while the challenges are modifiers that attempt to make the game trickier in various ways, such as introducing weapon and armour durability. The first challenges and mega bosses were introduced back in August.

It’s bittersweet, however, because this it for Deadfire—this is the last piece of paid DLC and, essentially, the end of this chapter of the Watcher’s journey. Wandering around a dungeon carved into the skin of a god sounds like an appropriately epic final adventure, but none of Deadfire’s DLC has really matched the scale of its predecessor’s. The White March Part 1 and 2 felt like a proper, classic RPG expansion, and while the previous piece of DLC, Beast of Winter, came close, it wasn’t quite as ambitious.

Really, I just want more Deadfire. Steamspy and Fig investment dividends (backers on the crowdfunding platform can get returns on the money they invest) suggest that the sequel sold quite poorly compared to its predecessor, but it quickly became one of my all-time favourites RPGs. Take a gander at Andy's Pillars of Eternity 2: Deadfire review.

Pillars of Eternity II is another fine RPG from Obsidian, brilliantly showcasing the studio's knack for strong world-building, intelligent, expressive writing, and varied quest design. It’s a big, deep, wordy CRPG in the classic mould, but with enough new ideas to feel like more than just a throwback.

Along with fellow RPG developer inXile, Obsidian has been snatched up by Microsoft. They’ll still keep their autonomy, Microsoft said in the announcement, though the switch from independent developer to a Microsoft studio will inevitably bring with it some changes. Some of them good, hopefully. Certainly, I’m excited to see what Obsidian can do with more resources.

The Forgotten Sanctum is due out on December 13.