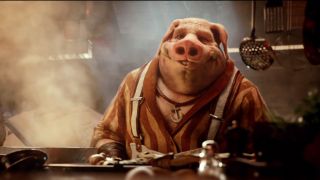 Ubisoft took a big hit last year when it announced long delays of major releases including Watch Dogs Legion, Rainbow Six Quarantine, and Gods and Monsters, following the failures of Ghost Recon Breakpoint and, to a lesser extent, The Division 2. CEO Yves Guillemot said at the time that while the delays "will have a very significant impact on our financial results" for the year, "we want our teams to have more development time to ensure that their respective innovations are perfectly implemented so as to deliver optimal experiences for players."

At the time, all three games were moved into the company's 2020-21 fiscal year, which begins on April 1. During today's Q3 investors call, Guillemot confirmed that the three games remain on track, along with two other unnamed games: Three "triple A" are now slated to release in the third quarter of the year—between October 1 and December 31, 2020, the big holiday season—and two are set for the fourth quarter.

"We are excited by the prospect of our lineup. The competitive environment will be challenging, but our production is progressing well, and our games will benefit from strong differentiation pillars. We also believe we have a well-balanced release schedule planned. It is not the first time we have had many releases in a given year, with five triple-As in financial year 15," Guillemot said during the call.

"And the year will not be limited to those five games, as we will also release titles with deep social layers, like Roller Champions." (For more on what "deep social layer" means, check out Phil's guide to making friends in the game.)

Unfortunately for anyone hoping that Beyond Good and Evil 2 , which was first revealed to the world in 2008 (no, not 2018, 2008), might be part of that lineup, it will not: "On BG&E2, we can't give you more information," Guillemot said, "except the fact that it's not going be in the five games we will announce."