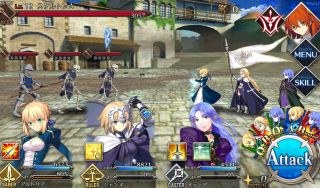 Twitter has shared some of the data it's been rifling through recently, revealing what games we've been chatting about throughout 2019. Apparently, Twitter was inundated with game tweets, 1.2 billion of them, but one game dominated the conversation more than any other. A Japanese mobile game from 2015.

Fate/Grand Order is a seemingly random combination of words that I have never seen before, so obviously I'm not hanging out in the trendy parts of Twitter. It's a turn-based tactical RPG, normally very much my wheelhouse, but it's also extremely anime. In fact, it's spawned its own anime adaptations, along with some Manga. And body pillows.

It's not been released in Europe and it didn't arrive in the US until 2017. Japan is where it's still most popular, and Japan is also the country that tweeted the most about gaming in 2019, followed by the US. The UK only came in 7th place, coming behind France. We've been busy with other stuff.

Here are the top ten games:

In esports, FaZe Clan was who Twitter was chatting about the most, while League of Legends Worlds 2019 was the most discussed esports event. In gaming generally, E3 was, not surprisingly, the event that generated the most tweets. The most talked about gaming personality, meanwhile, was that guy Mark Hamill had to play Fortnite with.