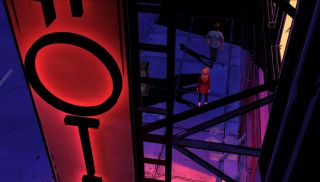 Er, this is awkward. This Episode 3 trailer for The Wolf Among Us starts with a spoiler warning for previous chapters. Telltale's Fables adaptation is currently sat in my Steam library's ever-growing backlog list, and so I've decided not to watch it. I really hope it is a legitimate trailer I'm posting, and not say a specialist "adult" retelling of the Big Bad Wolf. That would be embarrassing.

Whatever it is you've just watched, here's a plot summary from the trailer's description:

"After discovering damning evidence at a bloody crime scene, Bigby is just steps behind the prime suspect of a horrific murder, but he's not the only one; other forces in Fabletown will stop at nothing to protect their interests."

Telltale also promise that "every decision matters," which, hopefully, will prove to be the case. One of Tom's big issues when he reviewed Episode 2 was the apparently limited significance of the choices you were asked to make.

While advertised as a "launch" trailer, Telltale are yet to announce the episode's release date.