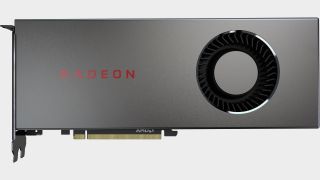 AMD's current-gen graphics card lineup only contains three models: the RX 5700, which performs similarly to the Vega 64 and RTX 2060, the slower RX 5500 XT, and the moderately faster RX 5700 XT. According to a series of leaks, it looks like another model could be joining the party: the 5600 XT.

While pre-release benchmarks are always to be taken with a grain of salt, since drivers are usually not complete, a series of Fire Strike and Time Spy tests indicate the 5600 XT performs similarly to the RTX 2060 Super and Vega 56.

Of course, there's still no indication of how much the 5600 XT will cost, but we probably won't have to wait long to find out—CES 2020 is just around the corner.