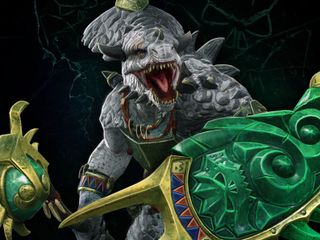 Creative Assembly is maintaining its tradition of releasing free DLC alongside the paid variety for the Total War: Warhammer games. Now the studio has announced that the forthcoming The Hunter & The Beast DLC will be accompanied by the free addition of a new Legendary Lord for the Lizardman faction. Gor-Rok, whose name is heavy metal AF even by Warhammer standards, is also known as the Great White Lizard—an albino saurus of unusual size who happens to be an unstoppable combat machine.

Gor-Rok will start with Lord Kroak by his side, the powerful Slann mage-priest who other lizardmen leaders have to work to summon during the campaign. He'll also have the Perfect Vigour, Physical Resistance, Terror and Regeneration traits, and presumably be armed with the same magic artifacts as his tabletop incarnation: The Mace of Ulumak and The Shield of Aeons. Although he might have to complete a quest chain first, you know how these things are.

The Hunter & The Beast comes out on September 11, and will coincide with an update to the Mortal Empires DLC that adds defensible forts. There's a nice excuse to start another Mortal Empires campaign I'll never find the time to finish.

Here's our list of the best Total War: Warhammer 2 mods.