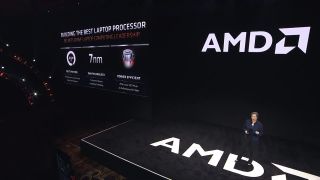 Predicting what will be the next big thing in PC gaming is both a science and an art form. Sometimes rumors turn into reality, and other times a company comes out of left-field with a miraculously well-kept secret. We had our expectations of what CES 2020 would hold this year, and while some of our predictions were spot-on, there were still plenty of surprises. CES is a nice mix of anticipated improvements on previous tech and new tech that may or may not stick in the years to come—but even if they don't stick, it's still cool to see what's next on the horizon for PC gaming.

There were big reveals in nearly every major PC hardware space, from laptops, processors and graphics cards, to innovative hybrid machines. There was a lot of news on the AMD-front, laptops, as well as surprise PC prototypes from Alienware and other vendors. But there were a few that stood out to us the most, and we're excited to see where things go from here—and hopefully get our hands on them again in the future.

It was the best new laptop we saw at CES 2020, and comes with either a 120Hz 1080p IPS-type display, or a 1440p 60Hz panel if you'd rather have a higher resolution. For added wow factor, there's also an AniMe Matrix LED array on the cover that can be customized to show various animations. The 180W power adapter has also been shrunk down in size, and for non-gaming use you can charge off a 65W USB Type-C PD (power delivery) port. All in a 22mm thick chassis with thin bezels, naturally.

One of the biggest surprises of CES 2020 was a prototype gaming 'desktop' from Alienware that looks very similar to a certain portable gaming console by Nintendo. Though heavily inspired by the design and form factor of the Nintendo Switch, Concept UFO differs in that it is a fully working Windows 10 PC shrunk down to handheld proportions with an 8-inch display, detachable controller, and kickstand. This means you'll have access to your entire catalog of PC games regardless of whatever digital storefront they're on.

The UFO has its own dock to output gameplay to a larger screen for a more traditional gaming desktop experience where you can connect a keyboard and mouse via Bluetooth. While Alienware has been pretty tightlipped on things like specs, pricing (most likely very expensive) or if they would even bring it to market, one thing we do know is we want Concept UFO to become more of a reality than a concept.

Granted, these TVs don't have dedicated G-Sync hardware like many gaming monitors do, but they have gone through the same rigorous G-Sync compatible testing. Only Nvidia Turing GPUs support HDMI 2.1 at the moment, unlike LG's TVs, but Nvidia opening the door wider to its G-Sync standard has made it possible for TV manufacturers to take advantage of the technology—and that's all good news for gamers.

4K TVs are generally way cheaper than 4K monitors, even at larger dimensions, and we're talking hundreds or maybe thousands of dollars in difference. Adding G-Sync compatibility to 4K TVs removes the usual barrier to entry to 4K gaming, provided you have the cash to throw down on a RTX 2080 Ti. But since LG has taken the first step into this new territory, it's only a matter of time before other TV manufacturers follow suit, and we start seeing more TVs make their way into gaming set-ups.

Plus, it's OLED. That means real blacks, and you can just forget about the 1,152 local dimming zones on the fancy new G-Sync Ultimate displays.

RGB lovers, here's a case for you. Forget the neon-lit fans at the front of the case, which have become all too common over the years. LEDs have been added to almost every hardware component and peripheral in existence, and yet RGB lighting design has stayed relatively the same. Individually backlit keys? Check. Sync lighting with audio? Check. PC case with a RGB light matrix? That's new. Well, sort of. This isn't the first case to have a light matrix on the front panel (that would be InWin’s 307 case), and other than InWin's 309, it's the first one to be available in the US market for an affordable price of $100—RGB lighting without the usual RGB up-charge.

In comparison to the InWin 309, the Metallicgear Neo has 114 individually controllable LED squares compared to 144, but both have pre-programmed pixel art. You can create your own images on the Metallicgear Neo case, too, and like the base-model Neo, it supports E-ATX motherboards up to 280mm and can fit two 280mm AIOs on the top and front. And the whole thing is made from steel. It's a beautiful and unique, budget-friendly case compared to the likes of other major PC cases on the market right now.

Elgato is arguably the leader in game capture and streaming hardware. This comes as a surprise to no one that it managed to make an external card that can record and stream in 4K HDR. The Elgato 4K60 S+ allows the content creator to record anywhere without the need of a PC thanks to the much-requested SD card slot. This means you can record your footage any time without the need for a PC. Plug in, hit the record button on the capture card, and pull the files from your SD card. Now you can put together that sick Call of Duty headshot montage to Linkin Park in no time.

With AMD now offering mobile Zen 2 processors, the CPU wars are moving to new ground. The Ryzen 7 4800U is AMD's first 8-core/16-thread mobile chip, and it sports a 15W TDP. It can probably easily exceed that and have to throttle down on clocks, but the base clock is still a respectable 1.8GHz, can turbo up to 4.2GHz, and it has Vega Graphics integrated.

AMD isn't including a number on this round, but the GPU has eight compute units, or 512 graphics cores. That's less than last year's 3700U (10 CUs), but the GPU clock is higher and we're told to expect a decent boost in graphics performance thanks to the 7nm tech. Basically, the chip will be able to run higher clocks within the 15W TDP this year, and some laptops will have the power limit bumped to 25W for better performance. Intel's 10th Gen mobile CPUs are going to be facing some stiff competition.

There were only two candidates for the best new graphics chip shown at CES: Intel's Xe Graphics (a developer test vehicle board that didn't impress us with its current level of performance), and AMD's trimmed down RX 5600 XT. The latter is an easy pick, and performance should be compelling. You get all the cores and ROPs of an RX 5700, but with 6GB of GDDR6, so less memory and less memory bandwidth. But it shouldn't hurt performance too much, and we're looking forward to testing the card for its January 21 debut to see how it compares to Nvidia's RTX 2060.

For 10 years, Origin has paraded the monstrous Big O gaming desktop at various trade shows by packing three gaming consoles into a super PC. To mark the decade anniversary Origin went ahead and surprised the CES showgoers with the news of a consumer version of the Big O.

The noticeably smaller hybrid gaming desktop starts at $2,499. You can configure your own Big O desktop that comes equipped with either a PS4 Pro or Xbox One X All-Digital (not both, sadly). The console and PC halves of the Big O have their own cooling, power supplies, and HDMI outputs. The console chip also gets liquid cooling, so it won't run nearly as hot as normal. This makes the Big O a powerful streaming machine as you can throw in an internal card for an added cost. More importantly, Big O is a ridiculous name and this means we will be saying more often, which I'm totally okay with.