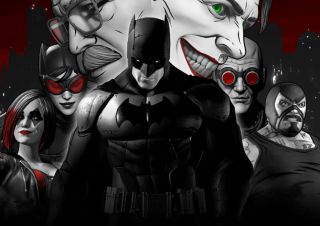 As Gematsu reports, a press release announcing a "noir-style visual makeover and graphical upgrade" for Batman: The Telltale Series alongside a rerelease called the Shadows Edition was quietly posted on the website of Athlon Games and then removed. Presumably a gun was jumped on an announcement that one of the rights-holders involved wasn't ready for just yet.

The holding company who bought the Telltale Games name and some of their back catalogue seem focused right now on promoting The Wolf Among Us 2, which was just announced at The Game Awards and is being developed by AdHoc, a studio formed by ex-Telltale staff.

According to the deleted press release, the Telltale Batman Shadows Edition would include both Batman: The Telltale series and its new DLC and be available on Steam and Epic for $30, with the Shadows Mode DLC (which presumably gives everything a Frank Miller black-white-and-red filter) available on its own for $5.

The press release also quotes Telltale Games CEO Jamie Ottilie as saying, "This is just the beginning in a much more expansive plan to build on our catalog of Telltale Games titles, which we hope to discuss in further detail in the coming months."