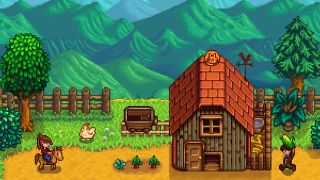 Eric Barone has spent years working on Stardew Valley, shepherding it from Steam Greenlight in 2012 to ten million copies sold in 2020. Amidst all that, he's also hinted at other projects now and then, although his dedication to Stardew Valley has always taken priority: The last we heard about such things was a little over a year ago, when Barone said that he'd put an unannounced project on hold so that he could focus on the farm.

But on Twitter today, he confirmed that the wheels are turning on new games.

Yes, I'm actually working on a couple of new projects. One takes place in the world of Stardew Valley, but is not a farming game. The other, I'm not 100% sure about the world yet, but it will tie into Stardew Valley in some wayFebruary 11, 2020

The first project sounds quite a bit like what Barone teased in October 2017, when he said that his next game was set "on the same planet" as Stardew Valley, but isn't a sequel or expansion. Alas, no further information has been provided since then.

"I’ve been deliberately secretive about it because I want to be able to work on it without any pressure for the time being," Barone said in the December 2018 devblog announcing that the project was on hold. "I also want to make sure the concept is fully realized before revealing anything, because once it’s out there, I’m going to have to fully commit to it. I’m a pretty cautious person when it comes to this sort of thing."

One thing we do know is that it's not Witchbrook, the magic school RPG announced in 2018 by Chucklefish that has been at times wrongly credited to Barone. Chucklefish published Stardew Valley prior to December 2018 (and still does on mobile), which occasionally leads to confusion about who "makes" the game; Barone clarified the nature of the relationship in a September 2019 update, and clarified today that he is not involved in the development of Witchbrook.