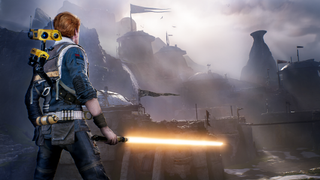 Star Wars Jedi: Fallen Order's latest update has unlocked a bunch of cosmetic bonuses that were previously only available to players who took a chance on preordering Cal and company's planet-hopping misadventure.

Jedi: Fallen Order lightsaber colours are more important to the Star Wars universe than character development, so most exciting of the bunch is the orange lightsaber crystal, which looks more yellow to me, honestly. You can gussy up your lightsaber itself, too, with the Mygeeto and Umbaran hilts.

Your pals benefit, too. BD-1 can now strut around in the Bee-D-1 skin, which decks him out in yellow like a diminutive construction bot. Those stuck back on the ship, meanwhile, can enjoy the new coat of paint with the Gold Squadron skin.

Fallen Order has been out for a couple of months now, so anyone who preordered it has had a fair amount of time to take advantage of their exclusive cosmetics. If you didn't preorder and have already finished the game, these bonuses won't have much of an impact, but it might be nice to have an orange lightsaber while you hunt down some secrets that you missed.

Along with the bonuses, the update also tackles some bugs, including an unusual one that made the photomode camera detonate rockets. Unfortunately it also introduced a game-breaking bug, which has also been fixed.

Check out the full patch notes.