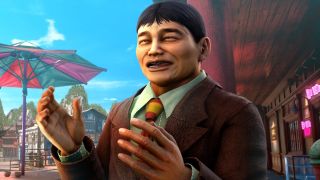 Shenmue 3 is "a seamless continuation of the series that makes up for its limitations with pure heart," we said in our 83/100 review. Its first DLC, Battle Rally was a bit different: a three-way footrace-fistfight between Ryo Hazuki, Wuying Ren, and Wei Zhen, with "awesome items" waiting for the first-place finisher.

If you're not really clear on how a footrace-fistfight goes down, here's a gameplay clip.

The second DLC release, coming next week, sounds like it will be considerably more substantial. Entitled Story Quest Pack, it will see Ryo reconnect with Zhang Shugin, a character returning from Shenmue 2. He required multiple rescues last time around and it sounds like more of the same may be required in the DLC, as players will "quickly become embroiled in a new escapade where nothing is as it seems."

The Story Quest Pack DLC is set for release on February 18 and will go for $6/£5/€6 on the Epic Games Store, and is also included in the $15 Complete DLC Collection. As with the Battle Rally DLC, you'll need to have reached Niaowu in the base game in order to access the DLC.

Nothing is as it seems...👊 In the latest #Shenmue3 DLC, our intrepid adventurer #RyoHazuki will cross paths with a familiar face.📣 The “Story Quest Pack” will drop on February 18th 2020 – are you ready? pic.twitter.com/VQiaSxkjYkFebruary 14, 2020