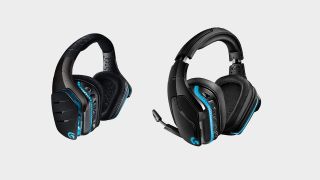 The Logitech G933 Artemis Spectrum is marked down to $49.99 from the original $200 price point. It's a killer headset that delivers 7.1 Dolby Surround and 7.1 DTS Headphone: X Surround Sound. The Artemis is perfect for folks who hop around between PC and console via wireless (on PC) and 3.5mm connection (consoles and mobile) without losing sound quality. The only downside is that this set of cans are on the older side (if you consider a 2015 release old) and have a bit of a bulkier design than newer Logitech headsets.

The Artemis's younger cousin, the G935 Wireless Headset, is down to $99.99 as well. While not as platform friendly as the Artemis, the G935 is still a pretty dope headset if you're strictly looking for a wireless gaming headset that utilizes Logitech's fancy 50mm Pro-G drivers on the PC and PS4. More importantly, wireless connectivity is second to none and you still have the the 3.5mm option to plug into other consoles. It's a rare sight to see a good pair wireless gaming headset this low of a price.

The Lightsync RGB lights on the headsets are little… much. But, they will sync to other Logitech devices in case you're into putting on a light show as you game.

Logitech G933 Artemis Spectrum| $49.99 (save $100.00)
A great platform-agnostic gaming headset with incredible sound that can easily hookup to all your favorite devices and consoles. If you just need a quality wireless headset for your PC, you can't go wrong with the Artemis. View Deal

To see how these headsets stack up to some of our favorites, check out our take on the best gaming headsets.